Is it jeans, is it denim or is it Durex condoms? Check it out.

Are these denims for new condoms, or condom for denims?

#DurexJeans is the latest Twitter trend. Going by hashtags, it is easy to fall for the fact that it might actually be a jeans-coated or jeans-based condom. Unimaginable?

Durex India took to Twitter two days back to launch their campaign for their new product #DurexJeans- Jeans and condoms! The two posters, revealed by the company so far include one talking about "No Zips, Buttons and Stitches Denim" and the second, a poster of brand ambassador Ranveer Singh, in an intimate embrace with a woman, in who's back pocket of her denims you can see the jeans-condom.

UPDATE: The latest product under the #DurexJeans campaign was revealed on Durex India's Facebook page at 5:30 pm on Friday. "Check out the video and click to buy now," said the minute long video, which showed Ranveer Singh in different positions and with a celotape. Watch here- 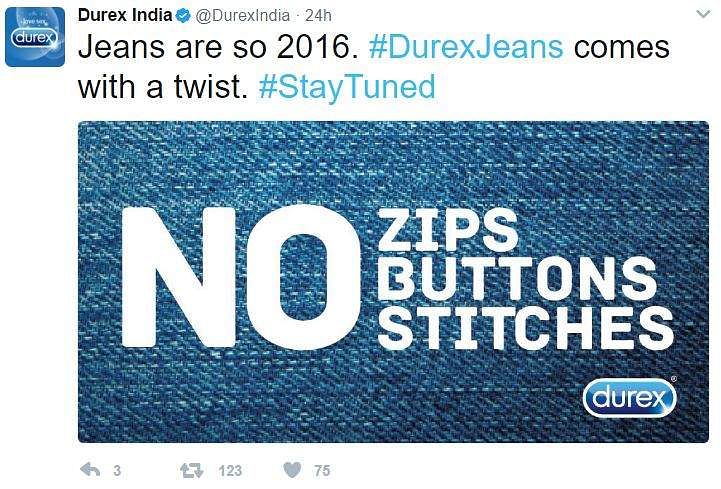 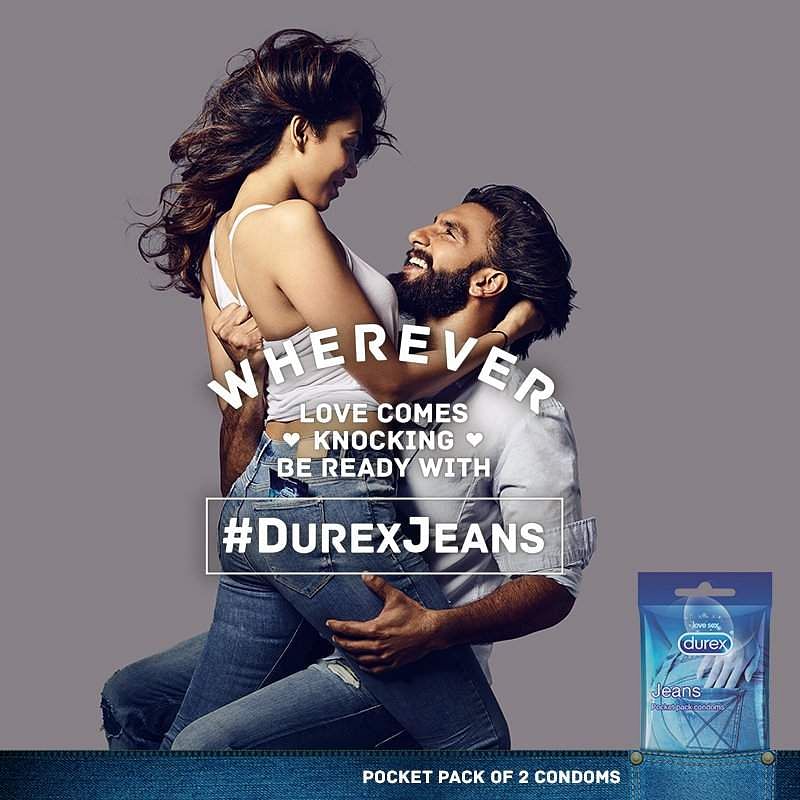 Jeggings, in today's fashion space, are the only denim-wear without zips and buttons. The details about the new product by Durex was to be revealed on March 25, according to their video.

In another video post of 15 seconds on Durex India Twitter handle, Ranveer Singh closes the curtains of a trial room, while he goes on to try his first ever Durex Jeans condoms.

We’re launching Jeans! And Ranveer’s gonna be trying out his first ever. Excited? Well, that’s our speciality! #DurexJeans pic.twitter.com/5UpIJFVBfw

While many found Durex's latest campaign surprising, many took to Twitter to make fun of the same.

Comedian José Covaco took the efforts to make a video of Durex Jeans as well!

LOL Durex is launching Jeans ? Buying them will be like... #DurexJeans pic.twitter.com/ZyYfZvybML

Ranveer Singh and his raunchiness in Durex condom ads have been a talking point for a while now. But a controversy spurred last year when a bill board poster showed him picking up a miniskirt-clad girl on his shoulders with the tagline ‘Take you work home’. Although the ad was for another company, Ranveer was lashed at for being a part of a 'sexist' campaign.

The "Do the Rex" man had also confessed back in 2014 to several media houses how he had lost his virginity at the age of 12 years and how he always prefers to carry a condom in his wallet.

Founded in 1915, this United Kingdom-based company was owned by SSL International. Durex entered India in 1997 when it was sold to the Indian venture TTK LIG Ltd. But after almost a decade, TTK had to give up their ownership rights of Durex condoms and sold it to the well known international brand Reckitt Benckiser in July 2010. RB is known for its products such as Dettol, Air Wick, Harpic, etc.

With over 80 years experience in the bringing couples together business, we know our way inside and outside of the bedroom, says Durex India's website. We believe, the jeans part is what they meant by "outside" the bedroom!

Now we are on Telegram too. Follow us for updates
TAGS
Ranveer Singh Durex Jeans Durex condoms