Their overall finances may be wobbly, but State governments aren’t shying away from footing substantial wage bills.

MUMBAI: Their overall finances may be wobbly, but State governments aren’t shying away from footing substantial wage bills. A cross-State variation of salary spending shows that in at least five States, Rs 25 to Rs 31 of every Rs 100 spent is towards salaries. This is more than the 24 per cent that advanced economies spend every year, according to the IMF.

Punjab tops the list of States, spending over 30 per cent of its total expenditure on salaries annually. States like Maharashtra, Andhra Pradesh, Kerala, Tamil Nadu and West Bengal too spend upwards of 24 per cent. But States’ payout on government salaries is nothing spectacular compared to IT services companies, one of the largest employers. For instance, TCS forks out roughly 55 per cent of its annual revenue towards employee costs every year, while Infosys’ spend is around 40 per cent. 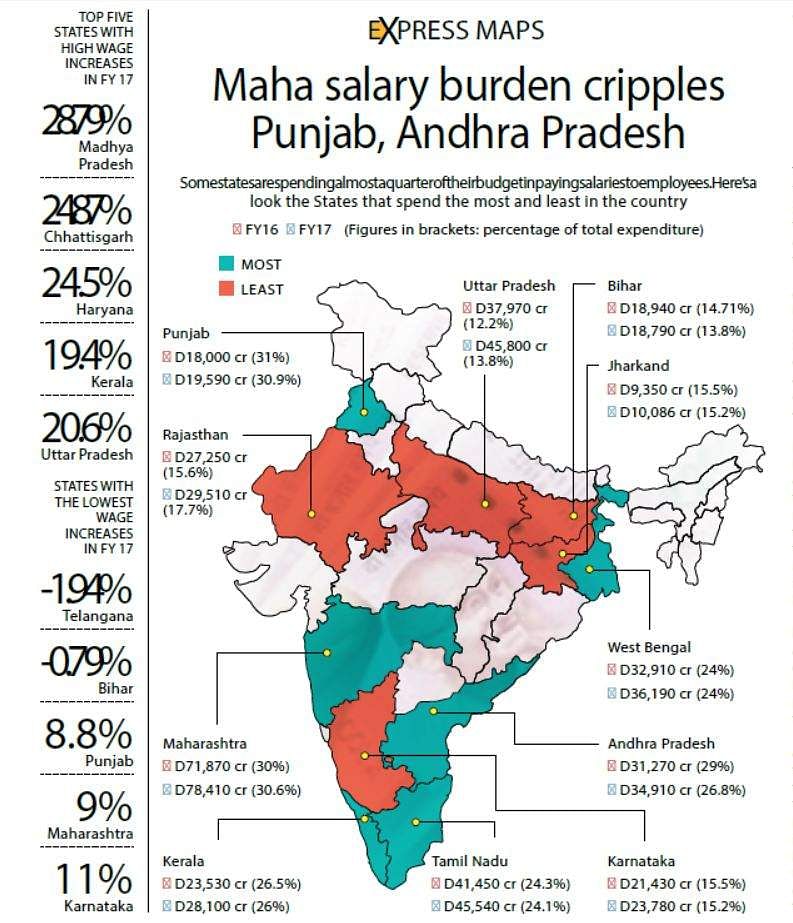 This narrative could change with the rollout of pay commissions, some of which match the Centre’s 7th Pay Commission dole. But this could stifle State finances further, according to the RBI. In its latest report on ‘State Finances 2016-17,’ it stressed that pressure on wage spending may further increase next fiscal, as State governments are setting up their pay commissions, which may impact projected deficit indicators during the current fiscal.

The pay commissions also come in the backdrop of massive jump in annual salary expenditures in at least five States, namely Chhattisgarh, Haryana, Madhya Pradesh, Kerala and Uttar Pradesh, whose expenditure during FY16 over the previous year ranged between 19 and 29 per cent. This was partly due to staff expansion and annual increments of existing staff.

The fiscal situation has already worsened for 20 States clocking deficits between 5 and 10 per cent and the revenue outlook is uncertain due to GST, though the Centre will compensate revenue loss for five years. In FY16, for the first time in 10 years, the State-level gross fiscal deficit to GDP ratio breached the 3 per cent ceiling of fiscal prudence set by the 14th Finance Commission. High wage bills, if ineffectively integrated can undermine fiscal planning, crowd-out priority spending crucial for growth and poverty reduction. Effective management of salary expenditure ensures public services are delivered in a cost-effective manner and competitive compensation to attract and retain skilled staff.

IT firms still cough up larger chunks for staff

While Infosys’ spend on employee costs is about 40% of its annual revenue, TCS shells out around 55%. Punjab, which spends the largest chunk on wages among States, gives about 30% of its expenditure to staff

Now we are on Telegram too. Follow us for updates
TAGS
Whopperwage bills State government