No firecrackers for Delhi-NCR till October 31: SC

The Supreme Court ruled that there will be no sale of firecrackers during Diwali in Delhi and National Capital Region.

NEW DELHI: To keep Delhi’s pollution levels under check, the Supreme Court in an unusual move on Monday banned the sale of firecrackers for the next 20 days and clarified that no crackers would be sold in Delhi-NCR this Diwali. As per the World Health Organization (WHO) report in 2016, Delhi was 11th among the world’s top 20 polluted cities.

According to a pollution assessment monitored by the Central Pollution Control Board, Delhi has a National Air Quality Index above 300. In other metro cities, the pollution index is much lower, with Hyderabad having 106.Pollution in Delhi is aggravated by smoke from burning of unwanted vegetation on farms in Haryana and Punjab, before planting of the winter wheat crop.The sale ban comes as a huge blow for firecracker traders and businessmen who have already stocked up for the festive season. With just nine days left for the festival, the court said its September 12 order temporarily lifting a stay and permitting sale of firecrackers would be made effective only from November 1. 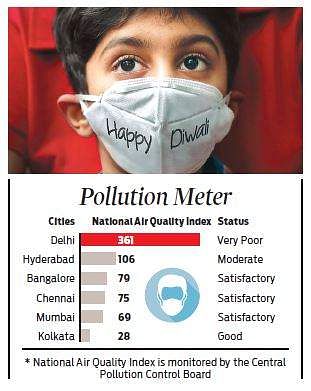 A bench of Justices AK Sikri, AM Sapre and Ashok Bhushan ordered immediate suspension of temporary licences issued by the police for sale of firecrackers pursuant to the September 12 order. “The November 11, 2016 order of suspending the licences should be given one chance to test itself to see if there would be a positive effect of this, particularly during Diwali,” the bench said.In 2005 too, the court had directed that there should be a complete ban on bursting sound-emitting firecrackers between 10 PM and 6 AM.

Sivakasi braces for 10 per cent loss, feels need to innovate

The order banning fire crackers in New Delhi has dampened the mood at Sivakasi Speaking on the ban, Kaliswari Fireworks director Selvaraj said there could be a 10 per cent loss to the industry. But he was also hopeful of overcoming the loss with exports. With an increasing number of people staying away from bursting of crackers due to environmental concerns, he also felt time has come for the industry to begin experimenting with making pollution-free crackers. Tamil Nadu Fireworks and Amorces Manufacturers’ Association president Asaithambi said the industry, which is already reeling under various factors including illegal Chinese crackers and GST, will surely suffer more adverse effects.

Now we are on Telegram too. Follow us for updates
TAGS
delhi NCR Delhi NCR