Allahabad HC acquits Talwars of their daughter Aarushi's murder; here is the entire timeline of events

Rajesh and Nupur Talwar were awarded life sentence by a special CBI court in Ghaziabad on November 26, 2013, a day after their conviction.

In a major relief for the Talwars, the Allahabad High Court on Thursday acquitted Nupur and Rajesh Talwar in the Aarushi Talwar Murder Case.

The court rejected the CBI court order sentencing the Talwar couple to life term for the murder of daughter Aarushi and domestic help Hemraj.

Allowing the appeal by the Talwars, the court was of the view that as per circumstances and evidence on record they can't be held guilty.

The couple were awarded life sentence by a special CBI court in Ghaziabad on November 26, 2013, a day after their conviction.

Here is the entire TIMELINE of events in the Aarushi-Hemra murder case:

October 12, 2017: The Allahabad High Court acquits the Talwars in the Aarushi-Hemraj murder case.

May 15-16: Aarushi Talwar found dead with her throat slit in the bedroom of her flat in Noida.

May 17: Hemraj's body found on the terrace of Talwar's house.

May 18: UP Police say the twin murders were done with surgical precision, insider job suspected.

May 22: Talwars come under suspicion, honour killing angle probed, the police quiz Aarushi's close friend whom she spoke to 688 times in 45 days preceding her murder.

May 23: Aarushi's father Rajesh Talwar arrested for the two murders.

May 29: Notification issued to hand over the case from UP Police to CBI.

June 1: CBI takes over the probe in the case.

June 26: CBI declares the case to be a "blind case". Rajesh Talwar refused bail by the special magistrate in Ghaziabad.

Feb 8-12: Narco-analysis tests on Nupur Talwar was done between February 8 to February 12 on CBI's plea.

Feb 15-20: Narco-analysis tests on Rajesh Talwar was done between February 15 to February 20.

Dec 29: CBI gives up the case with a closure report. Clean chit given to servants but fingers pointed at Talwars. 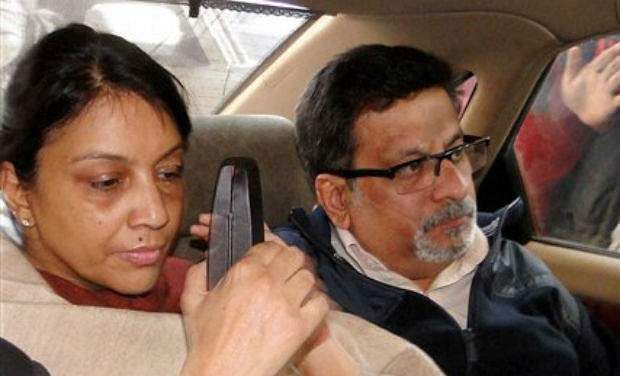 December 2010: The CBI files closure report, stating Rajesh is the main suspect but there is not enough evidence against him.

Mar 18: HC dismisses their plea to quash summons and orders initiation of proceedings against them.

Mar 19, 2011: The couple approaches the Supreme court which stayed the trial against them.

Jan 6, 2012: The apex court dismisses Talwar's plea and allows the trial against them.

May 6: Trial court dismisses Talwar's petition for summoning 14 witnesse. It orders recording of statements of Rajesh and Nupur.

May 13: Supreme Court refuses to entertain the Talwars' petition.

November 26: The Talwars' were awarded life sentence by a special CBI court in Ghaziabad a day after their conviction.

(With inputs from Agencies)