48 MP, MLAs have declared cases of crime against women, with BJP having the highest number: Association for Democratic Reforms

Giving party-wise details, the report said that BJP has the highest number of MPs and MLAs ie 12, followed by Shiv Sena and Trinamool Congress.

NEW DELHI: The BJP, in the last five years, has given tickets to 47 candidates with declared criminal cases against women, an Association for Democratic Reforms (ADR) report has revealed.

The BJP is followed by Mayawati-led BSP, which has issued tickets to 35 ‘tainted candidates’. The Congress has also given tickets to 24 such candidates.

The ADR analysed 768 MPs and 4,077 MLAs and found that 48 Members of Parliament have declared crimes against women and three MLAs have rape cases filed against them.

The three MLAs who have rapes cases against them are Gonuguntla Suryanarayana, TDP legislator from Dharmavaram in Andhra Pradesh, Jethabhai G Ahir, the BJP MLA from Shehra in Gujarat and Gulab Yadav of the RJD. Yadav represents the Jhanjharpur constituency in Bihar Assembly.

With respect to party-wise break up, the BJP leads the list with 12 legislators who have been charged with crimes against women.

The BJP is followed by the Shiv Sena with seven such legislators, the Mamata Banerjee-led Trinamool Congress with six. 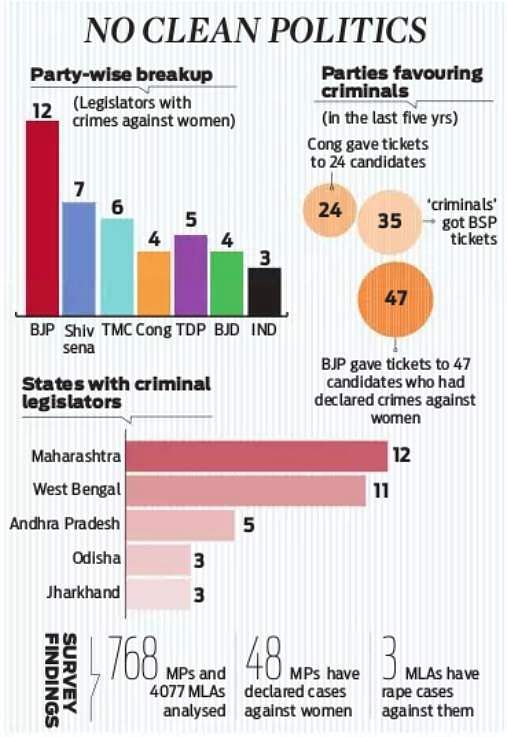 In terms of states, Maharashtra leads with 12 legislators having charges of crimes against women, followed closely by West Bengal with 11. Andhra Pradesh has five such legislators, while Odisha and Jharkhand have three each.

Among the states in the last five years, Maharashtra has the highest number of candidates at 65, followed by Bihar with 62 and West Bengal with 52 candidates who were given tickets by political parties even though they have declared cases related to crimes against women in their affidavits.

Now we are on Telegram too. Follow us for updates
TAGS
BJP MP MLAs Association for Democratic Reforms crime against women politicans