The government allocated Rs 1.48 lakh crore to the Indian Railways, with a large portion of the capital expenditure (Capex) dedicated to capacity creation and to ensure safety of train passengers.

NEW DELHI: The government allocated Rs 1.48 lakh crore to the Indian Railways, with a large portion of the capital expenditure (Capex) dedicated to capacity creation and to ensure safety of train passengers.

Like previous years, passenger fare and freight segment were left untouched. It means the country’s largest transporter will have to look to other resources for aid, especially as only Rs 55,000 crore is available as budgetary support for fiscal 2018-19.

A huge backlog in track maintenance, upgradation and capacity constraints on tracks is hampering expansion and punctuality. Creaking infrastructure is another headache as seen in the accidents in the last few years.

Over 3,900 km of track renewal is targeted during the current fiscal against 3,600 km last year. The Railways has set up an ambitious target of 2,100 km of doubling of tracks against 945 km last year and the targets for gauge conversion was increased to 1,000 km from 574 km.

Other major thrust areas include increasing use of technology like ‘Fog Safe’ and measures to eliminate 4,267 unmanned level crossings in the next two years.

“There has been significant improvement in the achievement of physical targets by Railways as well. We are moving fast towards optimal electrification of railway network. 4000 km are targeted for commissioning during 2017-18,” said Jaitley.

To meet the growing demand in passenger and freight segment, the railways will procure 12,000 wagons, 5,160 coaches and approximately 700 locomotives. Besides, a major programme was initiated to strengthen infrastructure at the goods sheds and fast track commissioning of private sidings. 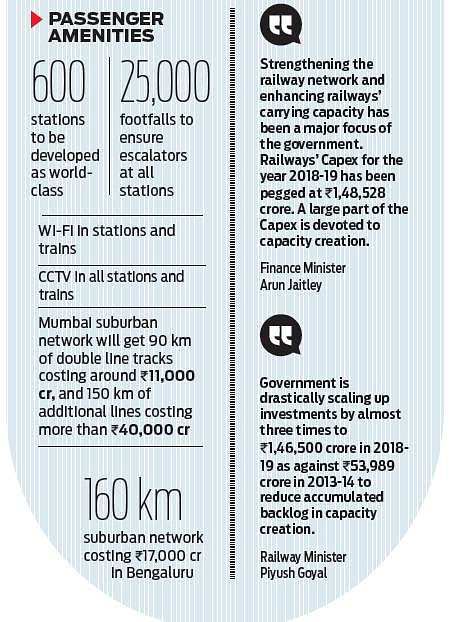