The Uttar Pradesh police might be patting their backs for having done in two hardened criminals carrying cash rewards of `50,000 each and smoking out over two dozen in 22 encounters during the last th

LUCKNOW: The Uttar Pradesh police might be patting their backs for having done in two hardened criminals carrying cash rewards of `50,000 each and smoking out over two dozen in 22 encounters during the last three days, but the script went horribly wrong in the case of a gym instructor (25) who had stopped for a pizza break at a roadside outlet in Noida late on Saturday night. 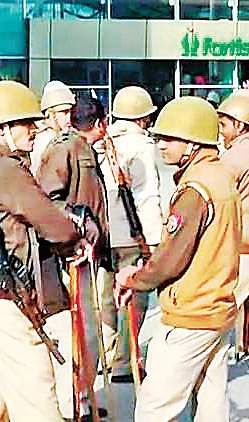 Sub-inspector Vijay Darshan, who got into Jitendra Yadav’s Scorpio and shot him from pointblank range as Yadav’s horrified friends screamed, tried to pass it off as an encounter. He was arrested  and three of his accompanying subordinates were put on suspension on Sunday.

Jitendra’s uncle Kripal Yadav, brother Dharmendra and two friends Gautam Sardar and Suneel Jat were together returning from the engagement of his co­sin in Ghaziabad in the car, when the fake encounter happened.

The incident, which took place in Phase III of Sector 122 of Noida, is indicative of how the freedom given to the cops by government to rein in the criminals co­uld be abused.

Admitting it did not seem to be an encounter, Senior Superintendent of Police Gautam Buddh Nagar, Love Kumar, told the media that no wireless message was flashed about the encounter by S-I Vijay Darshan. “Other police personnel informed us that Sub-Inspector Darshan had shot a person. We have seized his service revolver.”