PM Modi launches all-out attack against Congress in Parliament, asks if they want an India with Emergency, scams and Sikh massacre

While continuing his attack on Congress from Lok Sabha, Modi recalled Gandhi and said that the latter, post the independence, wanted the Grand Old Party to dissolve.

NEW DELHI: Continuing his tirade against the Congress, Prime Minister Narendra Modi today said the BJP was only following Mahatma Gandhi's dream of 'Congress Mukt Bharat' and wondered whether the grand-old party still wanted the "Old India" marked by Emergency, scams and massacre of Sikhs.

Replying to the debate in the Rajya Sabha on the Motion of Thanks for the President's address, Modi also urged the MPS to have a "constructive discussion" on holding of simultaneous elections to the Lok Sabha and the state assemblies.

He also criticised the Congress for non-passage of a bill to provide constitutional status to OBC Commission and the legislation against triple talaq.

He questioned the grand old party for the long delay in conferring Bharat Ratna to Sardar Vallabh Bhai Patel and Constitution's architect B R Ambedkar. 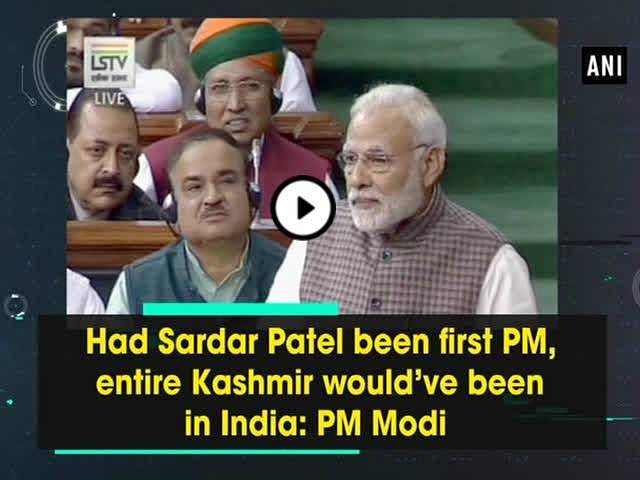 Earlier in the Lok Sabha, he said the country has been suffering due to the "wrong" policies the Congress has pursued since independence as the party has spent time singing paeans to one family instead of focussing on people's welfare.

In the Upper House, Modi countered Opposition criticism of his government's vision of 'New India' and said the Congress wanted 'Old India', a country envisaged by Mahatma Gandhi.

"I also want India of Gandhi's dream. And Gandhi had said since the country has got independence, now Congress is not required and should be disbanded.

"This Congress-mukt Bharat is Gandhi's dream. We are trying to follow the path shown by him," Modi said amid thumping benches by ruling party members.

He said the Congress wanted an India of the Emergency, Bofors, Chopper scams and the Tandoor case and wondered if the party wanted an India where thousands of Sikhs were killed after a 'big tree falls', in an apparent reference to 1984 Sikh riots following killing of then Prime Minister Indira Gandhi.

Modi sought to corner the Congress on the Bofors issue and quoted senior Congress leader and former President of India late R Venkataraman, who in his biography has referred to his meeting with noted industrialist JRD Tata.

"Tata said he felt that after 1980 the Congress party did not ask for poll funding from industrialist as the parties expense were run from the commission coming from defence deals," Modi said quoting Venkataraman.

has gone, the leaders continue to behave like 'Sultans', by lauded the Congress leader for seeking out openly.

Taking a jibe at the opposition parties, the Prime Minister said "Why should anyone feel bad if the country improves 'ease of doing business' rating? It is beyond comprehension. If nothing, some even start questioning the credibility of the rating agency just because it has did not happen under their rule!".

He said the Congress party while criticising BJP or Modi, start criticising India which adversely affects the country.

"Look at what all you mocked -- Swachh Bharat, Make in India, surgical strikes, Yoga Day. You are free to mock as you please but why are you blocking the bill for OBC Commission? Why are you blocking Triple Talaq Bill. Are you not sensitive to the aspirations of OBCs," he posed.

Referring to his recent visit to Davos, Modi said he went there and Congress also went there. "But the difference is you went with a letter to save someone," he claimed.

Taking on the Congress for accusing his government of only repackaging or renaming old schemes and programmes, the Prime Minister said "You call us name changers....we are aim changers - we work hard and have ushered in a paradigm shift in the working of the Government. Innovative projects are being thought of and completed in a time-bound manner."

On Congress statements that it had brought Aadhaar scheme, he said "let me remind them about a debate in the Rajya Sabha in 1998 and what LK Advani Ji said. It is in his speech that you will find the genesis of Aadhaar."

Raising the issue of simultaneous polls, he said thousands of crore are spent in conducting elections and so much time and energy goes into holding them and asked whether a country like India can afford it. He sought the opposition's cooperation in working out a solution in this regard.

Modi said the government was always looking for suggestions, feedback and input on its schemes. "After all, we are working for the nation and the poor," he said.

Referring to Leader of Opposition's remarks that BJP chief Amit Shah did not take Sardar Patel's name in his speech, he said Congress was using the picture of the first Home Minister during the Gujarat assembly elections, but it was not displayed in its programme just after the polls.

The Prime Minister highlighted achievements of his government that came into power in May 2014 and urged other parties to ask their state governments to allocate budget for bringing in behaviourial changes among people, especially in relation to Swachh Bharat programme.