The rising numbers of cases are despite the government repeatedly asking various ministries and departments to cut down on litigations.

NEW DELHI: The legal bills of the government have been progressively rising since the NDA came to power in 2014. According to the Union Ministry of Law and Justice, the government’s spend on lawyers’ fees has almost doubled in four years—from Rs 28.46 crore in 2014-2015 to Rs 54.37 crore in 2017-18 due to the significant increase in litigations in which the government is a party. 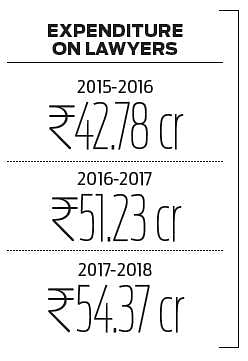 Sources in the ministry said many policies of the Central government have been challenged in courts across the country—such as Aadhaar, demonetisation and the triple talaq Bill. On Aadhaar alone, 27 petitions are pending before the Supreme Court. Though petitions against Aadhaar started trickling in 2012 itself, their number rose in 2016-2017 when the government started linking Aadhaar with welfare schemes.

Around a dozen petitions were filed against demonetisation, many of which are still pending before the Supreme Court. Around half-a-dozen petitions are being heard by courts against the Bill that seeks to criminalise triple talaq.

The rising numbers of cases are despite the government repeatedly asking various ministries and departments to cut down on litigations. In April last year,  Law Minister Ravi Shankar Prasad had written to all Union ministers and state chief ministers to launch ‘special arrears clearance drives’ to reduce pendency and minimise fresh litigation. The Central and state governments together account for approximately 46 per cent of the total 3.13 crore cases pending.

Stay up to date on all the latest Nation news with The New Indian Express App. Download now
TAGS
Union Ministry of Law and Justice legal bills of the government nda