Defence Minister Nirmala Sitharaman on Monday warned Pakistan that it will pay a price for the terror attack on an army camp in Jammu that left five soldiers and a civilian dead in a two-day gunfight.

JAMMU: Defence Minister Nirmala Sitharaman on Monday said militants who killed five soldiers and a civilian at an Army camp in Jammu were Pakistanis and warned that Pakistan will pay a price for the terror attack.

"Pakistan will have to pay for this misadventure," Sitharaman told reporters here. The deaths of "our soldiers won't go in vain".

The minister was in Jammu to take stock of the situation at the Sunjuwan Army camp which three heavily armed militants stormed it on Saturday morning and entered the residential quarters of junior commissioned officers, spraying bullets and hurling bombs.

She alleged that the terrorists who attacked Sunjuwan camp belonged to Jaish-e-Mohammed and sponsored by Azhar Masood residing in Pakistan and deriving support from there.

"6 fatal casualties, including a civilian were cost by the terrorists. 3 terrorists have been eliminated. There were reports of 4 terrorists. The fourth terrorist must have been a guide and may not have entered the Camp area.", said Sitharaman.

The operation was called off on Monday morning after the three attackers were killed. A fourth one, she said, may have been a guide and didn't enter the military base.

Sitharaman said the three militants were all Pakistanis and were handled by their Jaish-e-Muhammad leaders across the border. "The demography of the cantonment and the adjoining area indicates the possibility of local support to the terrorists."

The Minister asserted that evidence related to Jaish's involvement in the terror attack would be shared with Pakistan. "Giving evidence to Pakistan is a continuous process. It will have to be proved over and over again that they are responsible."

She said giving evidence to Pakistan would not prevent the Indian Army from responding "appropriately and at a time we deem fit".

Defence Minister Nirmala Sitharaman met those injured in the #SunjuwanArmyCamp attack at the Military Hospital in Jammu. pic.twitter.com/34pE1ZLiE3

Earlier, the Minister undertook an aerial survey of the Army station and visited the Army Hospital in Jammu city where those injured in the terror attack were being treated.

"The Supreme Court has given a 15 day stay on the FIR itself. We'll have to see how it goes. We have to stand by our proud soldiers and Army and in the call of duty if they have performed something it has to be contextualized", said the Defence Minister.

Intelligence inputs show that terrorists were controlled by their handlers from across the border. The evidence is being scrutinised by the National Investigation Agency. Pakistan is expanding the arch of terror to areas south of Pir Panjal and resorting to ceasefire violations to assist infiltration, she added.

Counter-terrorist operation in Sunjuwan was called off on Monday at 10.30 but sanitisation operation is still on.

Lashkar-e-Taiba (LeT) on Monday had claimed the responsibility of the recent terror attacks at Sunjwan Army Camp and Karan Nagar CRPF camp.

A CRPF personnel has lost his life in the ongoing encounter at the 23 Bn CRPF camp in Srinagar's Karan Nagar, where two armed-terrorists were spotted in the wee hours of Monday.

The alert CRPF men foiled Lashkar-e-Toiba’s fidayeen attack on their camp in Karan Nagar area of Srinagar, the summer capital of Jammu and Kashmir, on Monday and engaged militants in a gunfight near an adjoining building in which a CRPF jawan was killed and a policeman injured.

CRPF spokesman in Srinagar, Rajesh Yadav, said some AK-47 borne militants and carrying bags attempted to barge into the CRPF’s 23 bn camp at Karan Nagar area of uptown Srinagar at around 4 am today.

WATCH VIDEO | Pakistan will pay for this misadventure, says Sitharaman on Sunjuwan Attack 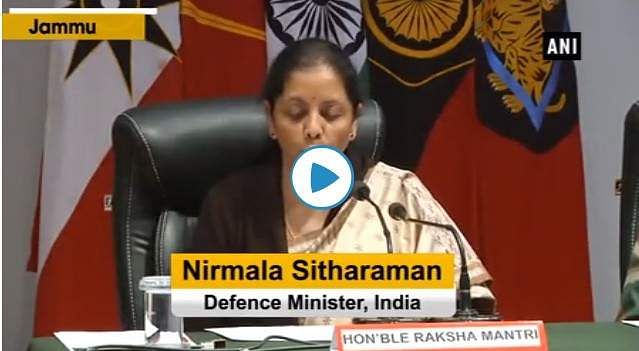 He said the alert sentries fired towards the militants, who ran away.

The CRPF men chased the militants, who took refuge in a nearby three-storey concrete building. The militants lobbed grenades and fired from automatic weapons towards the security men.

Four terrorists belonging to Jaish-e-Mohammed (JeM) have been gunned down.

(With input from agencies)