Cracking the Cauvery code: What's the water sharing dispute between Karnataka and Tamil Nadu all about

Will it bring cheers to Tamil Nadu ryots or not? Fingers crossed as SC to pronounce its verdict on decades-old water dispute today.

NEW DELHI: All eyes will be on the Supreme Court on Friday which will pronounce its decision over the decades-old Cauvery water dispute. The verdict will come on appeals filed by Tamil Nadu, Karnataka and Kerala against the final award of the Cauvery Water Tribunal in 2007 on the allocation of water to them.

A Bench headed by Chief Justice Dipak Misra and including Justices Amitava Roy and Khanwilkar will pronounce the verdict on February 16, which was reserved by them in September last year. 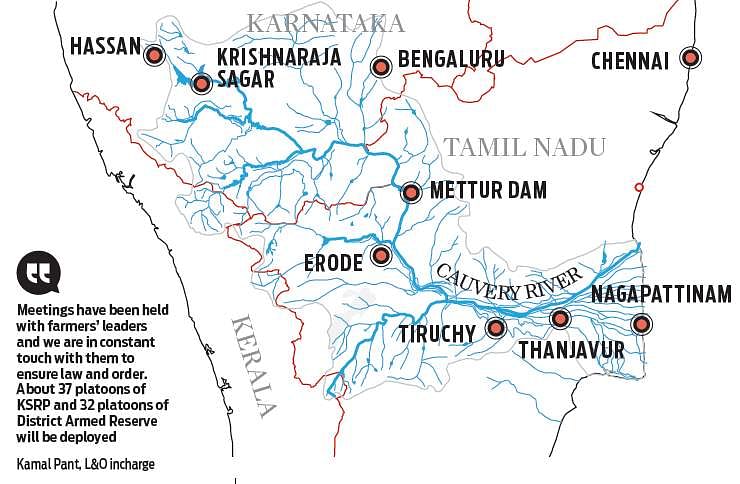 Before reserving the judgment, the court had pulled up the Centre for not implementing the final award of the tribunal and questioned the reluctance to set up a Cauvery Management Board.
The court’s remark came during the hearing of a plea, filed in 2016 by a citizens’ group led by Kiran Mazumdar Shaw seeking the court’s intervention for supply of drinking water to the residents of Bengaluru and surrounding districts.

Last year, the apex court had ordered Karnataka to release 2,000 cusecs of the Cauvery water to Tamil Nadu everyday as an interim measure till the appeals are finally decided by it.
The dispute dates back to the British era in 1911, when the princely state of Mysore agreed to seek the permission of the Madras Presidency before undertaking any irrigation projects on the river. The dispute began after the reorganisation of states in 1956, with Karnataka claiming that an agreement reached in 1924 was valid for 50 years.

The Cauvery originates in Kodagu in Karnataka, but more than 50 per cent of the river basin is in Tamil Nadu, with small tributaries also flowing into Kerala and Puducherry. Karnataka and Tamil Nadu are the two main parties to the river dispute.

The dispute over the Cauvery water sharing has been dragging on for many decades since the river was not only a source of drinking water, but also used for agricultural purposes. Kerala and the Union Territory of Puducherry are also lower riparian States involved in this dispute.

15,000 policemen to be deployed in Bengaluru on Friday. The SC is likely to take up the case at 10.30 am. Around the same time, Karnataka CM Siddaramaiah will be presenting State budget.