The Central government has identified 11,044 women manual scavengers and claims to have rehabilitated over 88 per cent of them.

NEW DELHI: The Central government has identified 11,044 women manual scavengers and claims to have rehabilitated over 88 per cent of them. These scavengers are scattered in 13 states, and more than 94 per cent of them (10,449) live in Uttar Pradesh alone. Others are spread across Andhra Pradesh, Assam, Bihar, Chhattisgarh, Karnataka, Madhya Pradesh Odisha, Punjab, Rajasthan, Tamil Nadu, Uttar Pradesh, Uttarakhand and West Bengal.

The official data, however, may not paint a clear picture about the total number of women manual scavengers as the Ministry of Social Justice and Empowerment has compiled data after receiving information only from 13 states. Sixteen states and seven Union Territories are yet to share the statistics in this regard with the Central government. 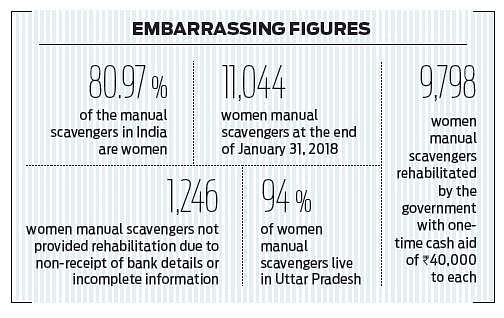 According to the ministry, it has rehabilitated 9,798 of the identified women manual scavengers by providing each of them one-time cash assistance of `40,000. Notably, 80.97 per cent of the manual scavengers are women, of which 1,246 have not been provided rehabilitation benefits due to non-receipt of bank details or incomplete information, ministry officials said.

According to Census 2011, 182,505 households in rural India have at least one member doing manual scavenging. Going by this data, there are at least 182,505 manual scavengers in India. Manual scavenging is the practice of manually cleaning, carrying, disposing or handling in any manner human excreta from dry latrines and sewers.