Punjab National Bank fraud: Manager under whose watch it all began in Mumbai arrested

Nirav’s palatial bungalow worth Rs 32 crore has a swimming pool, a theatre, a library, gym and five bedrooms.

NEW DELHI: The ongoing probe into the Rs 11,400 crore Punjab National Bank loan fraud by big diamond merchants Nirav Modi and Mehul Choksi gathered further momentum on Wednesday with a Mumbai court granting the CBI 14-day remand of six senior employees of the Modi-Gitanjali groups. The probe agency also sealed a 12,000 sq ft bungalow within a farmhouse at Alibaug near Mumbai owned by Nirav besides arresting a general manager of PNB.

Nirav’s palatial bungalow worth Rs 32 crore has a swimming pool, a theatre, a library, gym and five bedrooms. CCTV footage there has been seized and its contents are being analysed as part of the ongoing probe.

Late on Tuesday night the agency arrested PNB General Manager Rajesh Jindal from Delhi. “Rajesh Jindal was the branch head at PNB’s Brady House branch, Mumbai between August 2009 and May 2011. It was during his tenure at the Brady House branch that the practice of issuance of letter of understandings (LoUs) without sanctioned limits to Nirav Modi group firms had started,” said CBI spokesperson Abhishek Dayal.

Jindal, who is now General Manager (Credit) at PNB headquarters in Delhi, is among six serving or retired PNB officials who have been arrested in the case so far. 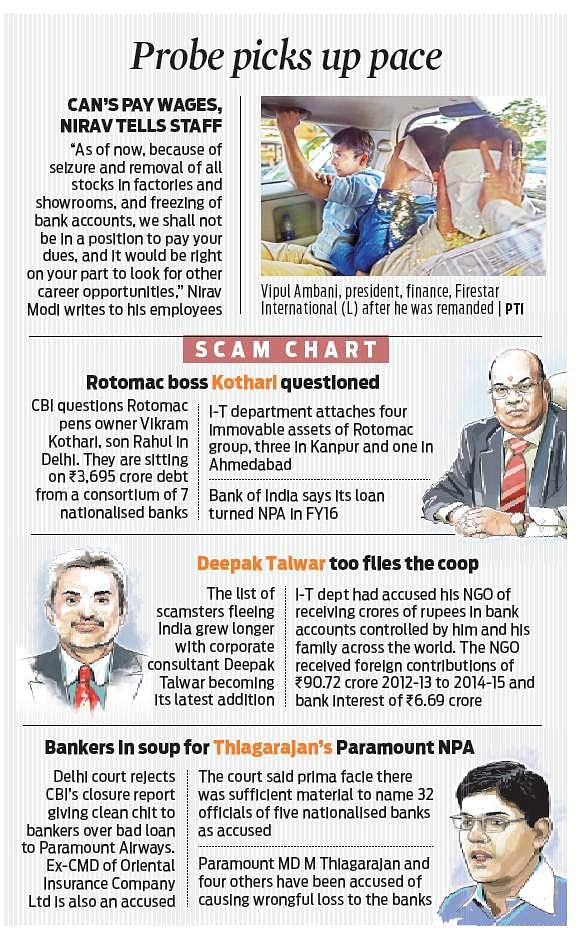