59 seats to go to polls on March 23; most of them will be cornered by the BJP, bringing the NDA strength closer to that of the UPA

NEW DELHI: Power equations in the Rajya Sabha are expected to swing in favour of the ruling National Democratic Alliance (NDA), as it is likely to bag most of the 59 seats that will go to polls on March 23.

At present, though the BJP is the single largest party in the House with 58 members, four more than the Congress (54), the entire Opposition put together has greater numerical strength, which is why it calls the shots. 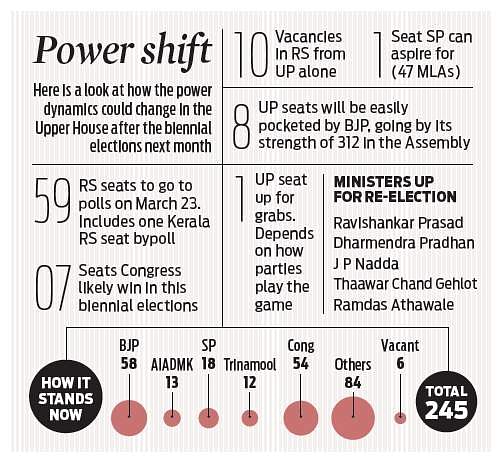 The Congress, which suffered a series of electoral reverses since the 2014 General Elections, is likely to win just seven of the 59 Rajya Sabha seats, sources in the know said.“The BJP will gain further and the NDA will come close to the UPA. The composition of the House will be altered,” a senior Congress leader, who did not wish to be named, told this newspaper on Friday.In other words, the Opposition’s ability to block or delay key legislations like the insurance bill, the Goods and Services Tax (GST) bill, or the one on Triple Talaq would weaken while the NDA would be more confident while piloting bills or taking up issues of public interest.

In the Lok Sabha, the NDA has been able to have its way as it enjoys brute majority, but not so in the Rajya Sabha.The terms of 58 Rajya Sabha members from 16 states is due to expire in April-May, which will throw up big vacancies in Uttar Pradesh (10), Maharashtra (6), Bihar (6), Madhya Pradesh (5), West Bengal (5) and Gujarat (4).

Of them, the BJP will get at least eight in UP, three in Maharashtra with one to ally Shiv Sena, three in Bihar, four in Madhya Pradesh and two in Gujarat.The Congress hopes to make some gains in Gujarat (2), Maharashtra (1), Karnataka (3) and Madhya Pradesh (1).In the 245-member Upper House, the UPA has around 122 and the NDA 93.

Over the past several sessions, the Opposition has been able to disrupt proceedings in the Upper House for days on end seeking accountability from the government while the BJP tried to paint them as anti-development.

While BJP’s Venkaiah Naidu is chairman of the Rajya Sabha being the Vice-President of India, party chief Amit Shah too is a member of the Upper House.With the altered power equations, political discourse in the Upper House could get shriller in the run up to the 2019 General elections, the sources added.