The Japanese obsess over the punctuality of their trains, the Swiss take pride in their federal railways being Europe’s most punctual train company, but in India, it is safety over punctuality.

NEW DELHI: The Japanese obsess over the punctuality of their trains, the Swiss take pride in their federal railways being Europe’s most punctual train company, but in India, it is safety over punctuality.
For the third year running, the punctuality of trains has fallen because priority is being given to safety-related infrastructure work such as track maintenance. 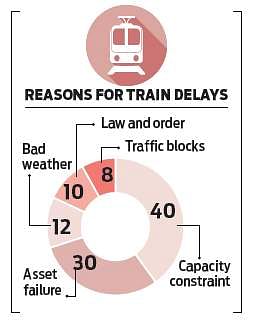 Things came to such a pass that every fourth train ran behind schedule in 2017, some even more than 24 hours late. Data for train punctuality between April and December 2017 shows that 16,000 more trains lost on punctuality during the same period the previous year.

The punctuality rate currently is 74.5 per cent as compared to 78.2 per cent in 2016 and 85 per cent in 2015. The punctuality of trains suffered in all categories, from superfast trains to mail and express trains.
Of the 1.09 lakh trains that were not punctual, nearly 40,000 were due to capacity constraint on the railway network. About 30,000 trains could not reach on time because of malfunctioning of wagons, locomotives and over head cables, among others.

The rest 35,000 trains were delayed because of traffic blockade for maintenance work, bad weather, law and order problem, cattle run over and rail blockades by agitationists.

Some of the major train accidents in 2017 were attributed to poor track maintenance and shortage of time for traffic blocks. The Utkal Express derailment that killed 23 passengers in August 2017 was the result of unfinished maintenance work.

According to the railway ministry, there has been a 43 per cent increase in traffic block to augment the infrastructure. “The punctuality graph is likely to fall further with the ongoing foggy weather in northern and central India,” a senior official said.

Now we are on Telegram too. Follow us for updates
TAGS
punctuality Train timings Indian Railways