BJP left red-faced as ally says make peace with Pakistan, and nothing wrong in condoling with kin of terrorists

SRINAGAR: A day after the ruling PDP stirred up a major controversy with its chief spokesman Rafi Ahmad Mir saying that there was nothing wrong in condoling with the families of killed terrorists, Jammu & Kashmir Chief Minister Mehbooba Mufti added fuel to the fire by advocating strong and friendly India-Pakistan relations. The double-whammy by its ally left the BJP red-faced. 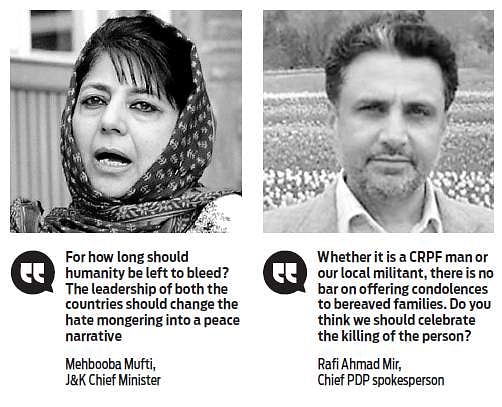 Her statement came a day after Rafi Ahmad Mir said that there was nothing wrong in condoling with the families of killed local terrorists, and that the party’s belief had not changed after coming to power in the state.

“Whether it is a CRPF man or our local militant, there is no bar on offering condolences with the bereaved families,” he said.

However, the PDP’s ally BJP termed it “unacceptable” and asserted that the party did not want to promote anybody who was against the country and the constitution of the country.
Thousands of people attend the funeral prayers of militants killed in encounters with security forces in the Valley. After participation by large numbers of people in funerals of several militants, including foreigners, the authorities are now not handing over bodies of foreign militants to locals but burying them silently in a graveyard in north Kashmir.

The PDP’s chief spokesman said if a person was killed, whether he was a militant or belonged to the security force, they condoled with his family.

“Do you think we should celebrate the killing of the person? We are not celebrating. We say, anybody who dies, whether he is a militant or a security jawan, we condole with the family on a humanitarian basis,” he said.