Spike in frauds is the price India pays for digital push

All these frauds pertained to online or digital mode of transactions, including ATM, debit or credit cards and internet banking.

NEW DELHI: The Union government’s increased focus on cashless transaction may have several benefits, but it also has side effects in the form of online frauds. Rising online transactions have resulted in a steady increase in the number of online cheating and fraud cases, especially after demonetisation. Government data has revealed that the number of such cases has gone up sharply every quarter following demonetisation.

While the number of online fraud cases in the September quarter of 2016 (before demonetisation) was around 3,100 involving money to the tune of Rs 1,546 lakh, it went up more than three times to about 10,200 cases involving Rs 11,185 lakh in the December 2017 quarter. All these frauds pertained to online or digital mode of transactions, including ATM, debit or credit cards and internet banking.

Digital transactions witnessed manifold growth in the last one year following demonetisation after government departments went all out to promote such transactions. Banks encouraged customers to use all electronic forms of payments by introducing enterprise-wide reward schemes so that the customer benefits from every digital payment. The government introduced incentive schemes for use of BHIM - Customer Referral Scheme and Cash Back Scheme for merchants. All these led to a substantial rise in digital or online transactions.

“Digital payment transactions got a major boost and increased from 91 crore in November 2016 to 153 crore in the October 2017,” Parliament was told in the just-ended Winter session.

Recently, MoS for Electronics and IT, K J Alphons, said digital payments have shown a dramatic rise, reaching 1,162 crore transactions between April and November and were expected to exceed 1,800 crore in the current fiscal. 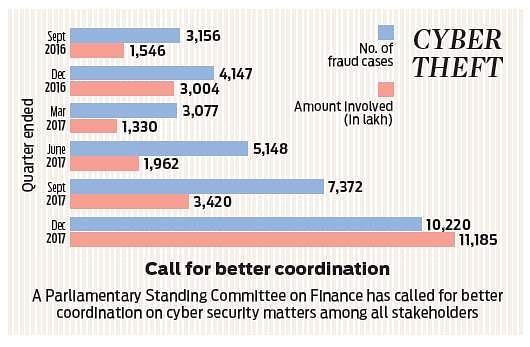 Now we are on Telegram too. Follow us for updates
TAGS
online transactions