With a daylight shoot-out, a life-threatening attack on a police officer, a mysterious murder and several fog-induced fatal accidents in the city, the week was pretty much violent for the eastern metr

A violent week for the city
With a daylight shoot-out, a life-threatening attack on a police officer, a mysterious murder and several fog-induced fatal accidents in the city, the week was pretty much violent for the eastern metropolis. Television channels repeatedly showing the crime scenes bearing signs of violence and detailing the goriness of the crimes aggravated the impact of the violence on the psyche of the ordinary residents of the city. 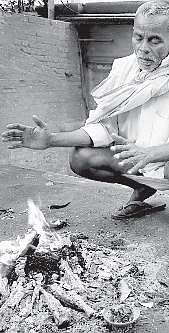 Ghanaian footballer pair Richard Teyi Akumiha and Teti Philip Aadza got the shock of their lives when they came to the City of Joy after paying their agent $500 to play in one of the reputed football clubs
of the city, only to find that they had been duped. The footballers have been roaming the streets in Kolkata  or the past two months but have not been given a trial opportunity in any of the football clubs. With their  isas set to expire within a month, the footballers will have to return home or face arrest. But they do not  ave enough money to return and are asking their contacts back home to help them.

The city has witnessed single-digit temperatures for more than 10 days running for the first time in more than 14 years, sending a chill down the spine of the majority of the residents and confining them to their homes. Those most affected by the sudden and prolonged spell of low temperature levels are the elderly, whose seasonal illnesses have resurfaced due to the chill. Also, tall buildings in most localities of the city prevent sunlight from reaching the balconies of apartments, leaving the elderly with only woollens to keep themselves warm.

Baked sandesh sells like hot cakes
After baked rasgulla, the baked variant of dry sweetmeat sandesh has appealed to the taste buds of many city residents who, despite loving sweets, cannot have much due to diabetes. However, the mildly sweet baked sandesh, in its many flavours, has been liked by many city residents and the several variants of the sweetmeat are selling like hot cakes in sweet shops in the city.