The protesters met the district collector and requested him to convey their message to the central government for banning the film across India.

JAIPUR:  In another show of strength, the Shri Rajput Karni Sena on Tuesday took out a massive rally in Dholpur in Rajasthan to demand a countrywide ban on Sanjay Leela Bhansali's "Padmaavat", which is scheduled for release on January 25. They have threatened mass immolation if the film is not banned.

The rally was led by Rajput Karni Sena patron, Lokendra Singh Kalvi. Thousands of women were seen walking in the protest rally.

The protesters met the district collector and requested him to convey their message to the central government for banning the film across India.

Dholpur was chosen as the location for the rally as it is situated on the Uttar Pradesh border. "We want the Yogi Adityanath government in UP to ban the film, as the Haryana government has already declared a ban in the state today," a senior member of Karni Sena told IANS.

"Earlier, we had met Haryana Chief Minister Manoharlal Khattar requesting him to ban the movie, and he had assured us the movie would be banned once they check its legal aspects."

"We want Prime Minister Narendra Modi to look into the issue and ban the movie across India. We met Home Minister Rajnath Singh on January 14 and apprised him of the challenges the country will face once the film is released," he said.

"Why the central government is keeping mum on this issue is beyond our understanding," he added. 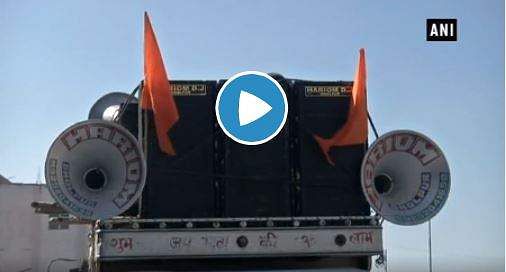 According to the Karni Sena member, 1,700 women have registered their names, addresses and consent letters from their families with the Jauhar Samiti in Chittorgarh.

"If the film's screening is not stopped, they will perform jauhar (mass immolation). The men will go to cinema halls with swords to stop its screening," he added.

All highways surrounding Chittorgarh will also be blocked on Wednesday as a mark of protest.

He warned that in case the film is released on January 25, "Republic Day celebrations will turn into a dark day as there will be all chances of a war like situation in the country".

"We are also planning a big protest at Jantar Mantar in Delhi from January 22 where thousands of Rajputs from across the country will be gathering to stage a massive protest," he said.

Asked if Karni Sena members are supporting Congress in the Ajmer and Alwar bypoll, he said that "looking at the silence of the central government and to protest against the injustice meted out to members of Shri Karni Sena who were demanding a CBI probe into the Anandpal issue, the Karni Sena members have vowed to ensure BJP loses the ensuing by-polls

More from Nation.
Now we are on Telegram too. Follow us for updates
TAGS
Deepika Padukone Karni sena Padmaavat mass immolation