Under pressure to take the initiative to resolve the deadlock, Chief Justice of India Dipak Misra on Tuesday took the first concrete step by holding a meeting with four other members of the Collegium.

NEW DELHI: Under pressure to take the initiative to resolve the deadlock, Chief Justice of India Dipak Misra on Tuesday took the first concrete step by holding a meeting with four other members of the Collegium, who in an unprecedented press conference on Friday had launched a broadside against his style of functioning.

The meeting with the four top dissenting judges, justices J Chelameswar, Ranjan Gogoi,M B Lokur and Kurian Joseph, lasted about 15 minutes. Justices A K Sikri, S K Kaul and D Y Chandrachud too participated. It began after the customary 10 am tea session in the judges’ lounge.

The issues raised by the dissenting four, including the skew in work allocation, were discussed. A full court meeting is likely on Wednesday where a resolution is likely to be adopted on the matter, claimed sources. After the meeting, all the eight judges went ahead with their listed business for the day, though about 15 minutes late. In the evening, the four top dissenting judges met again to discuss further steps, the sources added. They are said to be firm on having a threadbare discussion on the medical admissions scam and the purported transcripts of phone taps that point fingers at members of the higher judiciary.

OPINION: Putting back credibility in judiciary

The scam involves a medical college run by the Prasad Education Trust. The trust was initially denied permission to run the college, but that order was overturned after middlemen allegedly pulled the strings. 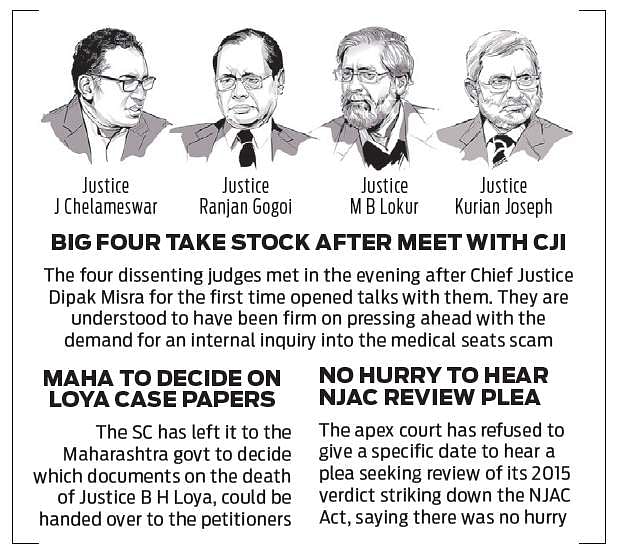 In a related development, senior advocate Prashant Bhushan’s NGO filed a complaint against Chief Justice Misra alleging he stopped the CBI from filing a first information report against a sitting high court judge in the medical college scam.

In its complaint, Bhushan’s Campaign for Judicial Accountability and Reforms (CJAR) sought an internal probe by the Supreme Court as well as by a special investigation team.CJAR filed the complaint under the in-house procedure of the apex court before the five seniormost judges — justices Chelameswar, Ranjan Gogoi, M B Lokur, K Joseph and A K Sikri. An earlier complaint on the scam by the CJAR was recently dismissed by a three-judge bench, which had also imposed `25 lakh cost on it.

Meanwhile, in the Justice B H Loya case that came up before justices Arun Mishra and Mohan M Shantanagoudar, the order read: “Let the documents be placed on record within seven days and if it is considered appropriate copies be furnished to the petitioners. Put up before the appropriate Bench.” The last sentence triggered speculation on whether the case is to be reassigned.