Even the reduction in prices of homes and housing projects has failed to push up the numbers of buyers.

Even the reduction in prices of homes and housing projects has failed to push up the numbers of buyers.

According to a research study by Knight Frank India Limited, 2017 witnessed a 7 per cent dip in the sale of residences across India, as compared to 2016. Taking note of the fact that high rate of interest discouraged interested buyers, the government had introduced the Credit Linked Subsidy Scheme under PMAY.

“Measures such as the RERA and PMAY were expected to boost the buyers’ sentiments, but they could not make any significant market impact. The buyers get little incentive as high prices continue to make homes unaffordable,” read the research report. 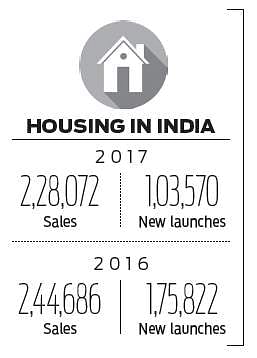 Last year clocked the largest percentage of drop in supply volumes in a decade.

“The scale of the meltdown in market volumes can be gauged from the fact that annual supply levels in the Indian real estate residential market are now just one-fourth of those in 2015,” the research further equipped, adding that sales volume hit seven-year; 62 per cent down from the peak of 2011.

“Realty prices have fallen on an average of 3 per cent in most cities. Pune saw the highest decline at 7 per cent. Mumbai residential prices cracked and fell 5 per cent. Hyderabad and Ahmedabad saw prices move up 3 per cent and 2 per cent respectively due to high proportion of ready inventory in markets there,” read the report.

More from Nation
Now we are on Telegram too. Follow us for updates
TAGS
home sales realty sector