The film has been facing protests by the Karni Sena and other fringe groups over allegations that historical facts were distorted in the movie.

MUMBAI: A day before the release of the controversy-hit film "Padmaavat", the police detained more than 100 supporters of the Karni Sena from the city today as a precautionary measure, an official said.

The police are well-prepared to tackle any situation, he said, adding, "We have provided adequate security to the theatres."

"The police took into preventive custody over 100 supporters of the Karni Sena to avoid any possible protests against the film that may create law and order problems," a police spokesperson told PTI.

"Adequate security has also been provided to the makers and actors of the film," he said. 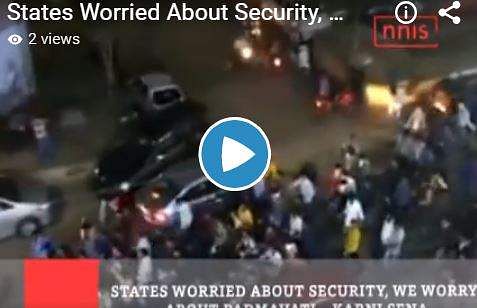 Another senior police official said the supporters of the Karni Sena were detained as some of them had gathered for a protest, while some others were planning to stage an agitation tomorrow.

"More people are likely to be taken into custody in this connection," he said.

The film has been facing protests by the Karni Sena and other fringe groups over allegations that historical facts were distorted in the movie.

The film, starring Deepika Padukone, Shahid Kapoor and Ranveer Singh, is based on the saga of the 13th century battle between Maharaja Ratan Singh of Mewar and Sultan Alauddin Khilji of Delhi.

The Supreme Court had last week paved the way for the nationwide release of "Padmaavat" by staying the ban on its screening in Gujarat and Rajasthan.

The movie, which was earlier named "Padmavati" and was slated for a December 1 release, will now hit theatres worldwide tomorrow.

More from Nation.
Now we are on Telegram too. Follow us for updates
TAGS
Mumbai Karni sena Padmaavat protest