West Bengal tops in underage marriage of women in India

West Bengal tops the list of states for women getting married before the legal age for marriage in the country, a government survey of marriages and sexual behaviour has found.

NEW DELHI: West Bengal tops the list of states for women getting married before the legal age for marriage in the country, a government survey of marriages and sexual behaviour has found.

About 5.78 lakh women were covered across the country for the survey, which revealed some interesting trends in sexual behaviour.

Among the states, West Bengal tops the list for women getting married before the legal age, followed by Bihar, Jharkhand and Andhra Pradesh.

It said about two-fifths of women marry before reaching the legal minimum age in West Bengal (44 per cent), Bihar (42 per cent), Jharkhand (39 per cent), and Andhra Pradesh (36 per cent). 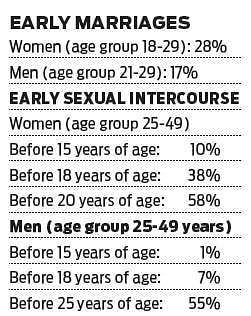 About one-third of women in Rajasthan, Assam, Madhya Pradesh, and Tripura (33 per cent each), as well as Dadra and Nagar Haveli (32 per cent) and Telangana (31 per cent) marry before the legal age of marriage. The percentage of women marrying before 18 is lowest in Lakshadweep (5 per cent), Jammu and Kashmir and Kerala (9 per cent each), and Himachal Pradesh and Punjab (10 per cent each).

The survey report pointed out that early marriage had been declining over time in the country.

Now we are on Telegram too. Follow us for updates
TAGS
West Bengal marriage Child marriage underage marriage