500 Indians stranded in Nepal's Simikot due to bad weather

At least 500 Indians, mostly Kailash Manasarovar pilgrims, are believed to be stranded in the mountainous regions of Simikot in Nepal after all flights to and from the region were cancelled.

CHENNAI: AT least 500 Indians, mostly Kailash Manasarovar pilgrims, are believed to be stranded in the mountainous regions of Simikot in Nepal after all flights to and from the region were cancelled due to bad weather. One pilgrim, 55-year-old Leela Namboodiripad, died of cardiac arrest on Monday morning, a day after her flight was cancelled. 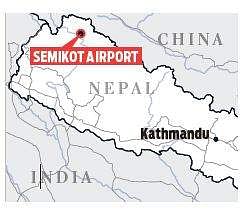 While pilgrims have found shelter at hotels or at roadside shops converted to accommodate them, the weather has taken a toll, especially on older pilgrims. The Indian Embassy in Nepal tweeted that it was aware of the situation and action was being taken for safety and comfort of pilgrims. Namboodiripad’s husband Sethu Mahadevan told Express the cardiac arrest was said to have been because of the low oxygen levels. “We were supposed to leave yesterday but were unable to do so because all flights were cancelled,” he said.

The couple, natives of Wandoor in Malappuram district in Kerala, was part of a group of 41 pilgrims, who began their trip on June 22. They had returned from Manasarovar on Sunday and were waiting for a flight out of Simikot to Nepalgunj from which tourists fly to Kathmandu. Namboodiripad’s relatives have tweeted to External Affairs Minister Sushma Swaraj for help to bring the body back.

pilgrims reach out to sushma via twitter
@VIGNESH52255186: Madam, more than 700 yathris including my parents are left stranded in simikot, Nepal because of non availability of flights. Kindly arrange to provide flights in order for them to reach their destination.
@73Karuppasamy: without changing the dress which is held up in nepalganj. Not only we are 100s of indians facing this problem not beacuse of only weather.  Due negligence of Nepal flight operators Goma AIR pilots went to strike on Saturday and  Repair in Tara air.

Several others — friends of those stranded and the tourists themselves — have also tweeted to the Minister for urgent aid.

Said Deenadhayalan, a resident of Villivakkam in Chennai who has been stranded in Simikot for the fifth day on Monday, “For now, we have found food and shelter but many Indians are stuck here, wearing the same clothes for a week now.”

Deenadhayalan was part of a group of 23, who started from Chennai on June 20 and was scheduled to return on June 28.

The flight they had initially booked to Nepalgunj was cancelled after employees of the private airline went on strike.“For so long, the hoteliers managed with local supplies to provide food for us. But from today, there was scarcity. From tomorrow, it is going to be very difficult,” said B Rammohan from Perambur, who is also stranded in Simikot.

Meanwhile, local tour operators said that they were looking to arrange special planes and helicopter rides at an added cost of `11,000 per individual. However, the plans had not materialised yet, they said.

Support from Embassy
The Indian Embassy in Nepal tweeted that the mission was aware of the situation and action was being taken for the safety of the pilgrims. Meanwhile, the Karnataka CM’s office on Monday night said that evacuation was not currently an option due to inclement weather. But, pilgrims were receiving support from the Embassy. The pilgrims/family may contact Shri Pranav Ganesh, First Secretary, Embassy of India Kathmandu at +977 985-1107006