The gun-battle took place along the border areas of two strife-torn districts of Dantewada and Bijapur about 400 km south of Raipur. So far 67 Maoists were killed this year in Chhattisgarh.

RAIPUR: Eight Maoists including four women fighters were gunned down by the security forces in a fierce encounter in the conflict zone of Bastar, south Chhattisgarh on Thursday.The gun-battle took place along the border areas of two strife-torn districts Dantewada and Bijapur, about 400 km south of Raipur.
The forces also recovered two INSAS rifles, two .303 rifles, few muzzle loading weapons and other ammunitions from the spot.

With the recovery modern weapons, police believe senior Maoists leaders were among those killed in the gunfight.  The reinforcement was rushed to the area to further intensify the search operation. “Based on the intelligence inputs about the movement of Maoists in the region, a joint team of Special Task Force (STF) and District Reserve Guards (DRG) from Dantewada left on a search operation. The rebels opened fire of troopers and in a heavy exchange of fire that ensued close to Timinar and Pusanar villages along the border of Dantewada and Bijapur, eight rebels including four women were shot dead. Their bodies have been recovered,” said P Sunderraj, Deputy Inspector General of police (anti-Maoist operation) . No security personnel were killed in the gun battle, he confirmed.

So far 68 Maoists were killed this year in Chhattisgarh, which continues to be hardest-hit by Naxal violence for over three decades. With strategic deployment of massive forces in the state, the government has set a deadline of 2022 to eliminate the left-wing extremism from the state. 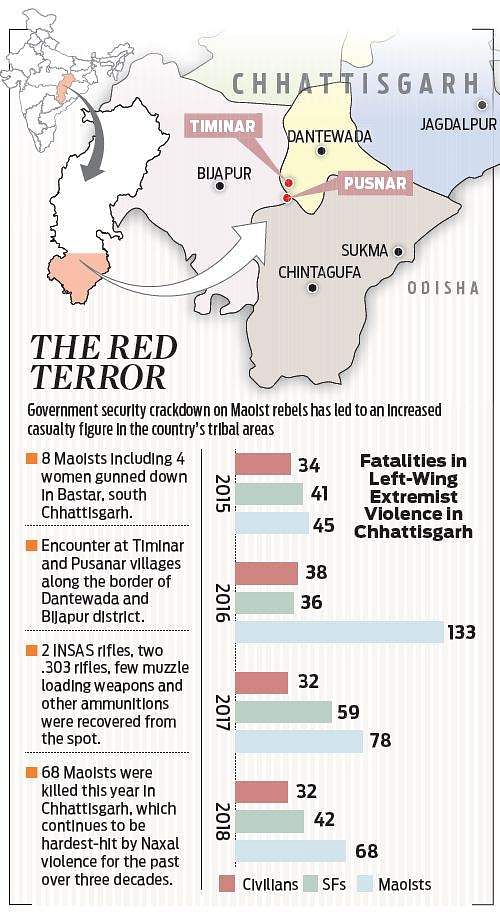