The five-member Collegium said that there was "nothing adverse" regarding suitability of Justice Joseph as has been pointed out in the letters of the Law Minister Ravi Shankar Prasad.

According to the resolution of the Collegium’s July 16 meeting uploaded on the Supreme Court website on Friday, it “carefully considered” the observations by Law Minister Ravi Shakar Prasad in his letters addressed to the Chief Justice of India. But it decided to stick to its stand “since nothing adverse regarding suitability of Justice K M Joseph has been pointed out in the letters”. 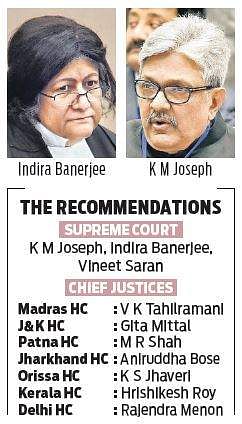 The Collegium comprising the top five judges of the SC, in May agreed to reiterate Joseph’s name but stopped short of formally approving it. The decision was further delayed by the retirement of Justice J Chelameswar and necessitated the need to reconsider the decision to send Joseph’s name back to the Centre.

It also recommended to elevate Madras High Court chief justice Indira Banerjee and Orissa HC Chief Justice Vineet Saran to the Supreme Court.“The collegium has taken into consideration the combined seniority on all-India basis of chief justices and senior puisne judges of high courts, apart from their merit and integrity,” it said.

At present, judges R Banumathi and Indu Malhotra are the two woman judges in the apex court. Justice Banerjee would become the eighth woman judge in the history of the Supreme Court. If all three appointments are made, the SC judges tally will reach 25 with six vacancies.
With Justice Banerjee’s elevation, V K Tahilramani, the second senior-most judge of the Bombay High Court, has been recommended to replace her.In all, the collegium recommended names for chief justices of seven high courts.