Rajnath Singh raises anti-Sikh riots to counter Opposition attack on the government over mob killings in the country.

NEW DELHI:Union Home Minister Rajnath Singh sought to blunt the Opposition’s attack on the spike in lynching deaths, while reminding the Congress of the anti-Sikh pogroms of 1984. Stating that the “biggest” mob lynching in the history of India was the 1984 anti-Sikh riots, Singh asked the Congress not to preach the government and shed “crocodile tears”.

The government is also ready to offer all necessary help to the state governments to curb such incidents in the country, Singh asserted. The Union home minister took potshots at the Congress, saying the NDA government constituted the Special Investigation Team (SIT) probing the riots. The government will ensure justice to the families of the victims, he said. “We have seen the sufferings of our Sikh brothers and sisters.”

Rebutting Congress president Rahul Gandhi’s assertion that his party ensured democracy in the country, Singh said the biggest assault on democratic framework of the country was the imposition of the Emergency.

He also recalled the quote of the former Prime Minister Rajiv Gandhi that only 16 paise reached beneficiaries out of 100 paise released by the Centre. The Narendra Modi government has ensured that 100 per cent money reaches the beneficiary through the facility of direct benefit transfer (DBT), the home minister said.

Hitting out at Congress lawmaker Shashi Tharoor’s ‘Hindu Pakistan’ remark, the minister wondered what kind of India the  opposition party wanted to envisage of.“Where do they (Congress) want to take the country and what does it want India to become. Here, there is a talk about Hindu Taliban. India is the only country where minorities are prospering. Do they not want such an India,” the Home Minister said.
Singh took potshots at the opposition parties for their doubts about their leadership and policies.

”Against whom are you bringing no-confidence? The appeal of the prime minister is such that several people gave up the gas subsidy after he urged them do so. They (the opposition) do not trust each other. And when it comes to talking about the leadership, then ‘gayi bhains paani mein ,” Singh said.

Singh also refuted claims of the Opposition on economy by stressing that world agencies have consistently noted India being the fastest growing economy in the world. The country has risen from number 9 to number six over the last four years under the NDA’s and PM Modi’s rule,  the Home minister added. “By 2030, India will be among the top five world economies.” 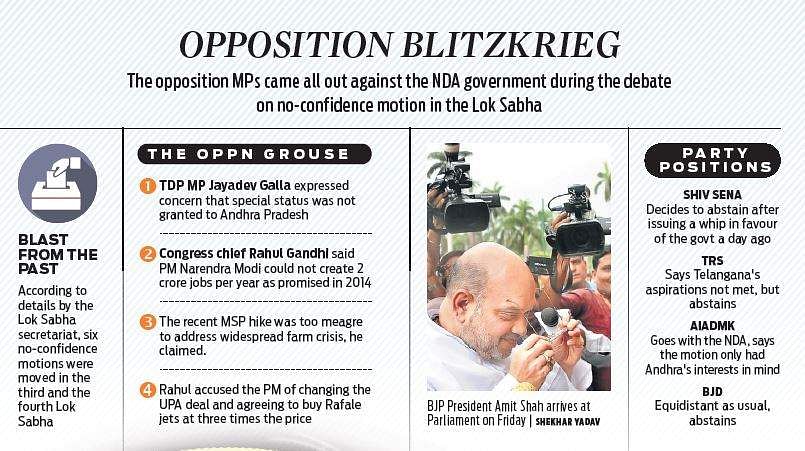 Stay up to date on all the latest Nation news with The New Indian Express App. Download now
TAGS
no confidence motion