Congress leader Rahul Gandhi set the terms of the debate with a caustic attack on Modi and followed it up with ba theatrical hug that took everyone by surprise.

NEW DELHI: Unlike chess, a Parliament debate offers the advantage to the one who plays last. Prime Minister Narendra Modi, with his long speech playing out at prime time, found enough biting wit and aplomb in his rhetoric to even the scores — as he was expected to. And the numbers in the end — 325 Noes and 126 Ayes — offered the NDA a resounding win. But the real surprises of Friday’s no-confidence motion debate perhaps still lay in the first half.

After a strong opening by the TDP’s industrialist MP Galla Jayadev, Congress leader Rahul Gandhi set the terms of the debate with a caustic attack on Modi —  and followed it up with the headline event of the day, a theatrical hug that took everyone by surprise. The PM’s verbal skills came to the rescue, with class and caste thrown in to mock the elitism of the Congress dynasty. But the BJP had been thrown into reactive mode, an unusual role for it, having to recover ground in a script not of its choice — making for an interesting contest where the two were more evenly matched than ever before.

Earlier, raking up the Rafale deal, Rahul had called the PM “not a chowkidar, but a bhagidar” (not a sentinel, but a partner of profiteering industrialists). The question of a secrecy pact with France became a parallel debate — with Defence Minister Nirmala Sitharaman springing to counter Rahul after he accused her of “lying”.

But the point of interest was not the technical details of bilateral pacts. Rahul had personalised his critique, accusing Modi of crony capitalism. And saying, tauntingly, that the PM was “feeling nervous and unable to meet his eyes” as he laid out the charges. After riffing on hate and lynchings, and how the BJP/RSS had taught him how to be a real “Hindu” — that is, by not hating — he pulled the rabbit out of his hat. Walking over to the treasury and hugging a startled Modi, who finally shook his hands.

Later, Modi deployed Rahul’s own words against him with devastating irony. “How could I dare to look into their eyes,” he asked mockingly, alluding to the class gap. “Woh naamdar hain, hum kaamdar hain” (They are people with a ‘name’, we are workers).

He also read out a list of those who had dared to look the Congress high command in the eye and what became of them —  from  stalwarts of the early decades to Pranab Mukherjee.

He also quoted P Chidambaram from the 1990s, when he had analysed the Congress’s loss of pre-eminence as an effect of power flowing to formerly disempowered strata of society, including the “intermediate castes”.

The PM’s wordplay then took the event of the day and turned it—the Congress had “no confidence” in India’s institutional strengths, he said.No confidence in economic data, in the RBI, the Election Commission, in EVMs, in the Chief Justice.

He rounded it off saying he was both a chowkidar and a bhagidar (sentinel as well as the partner of the poor) and never a “saudagar or thekedar” (those who strike deals and contracts).On Rafale, he admonished Rahul in an almost paternalistic tone for bringing disrepute to a defence procurement entered into by two nations. In effect, hinting at his “immaturity”, a frame in which the BJP likes to cast him. 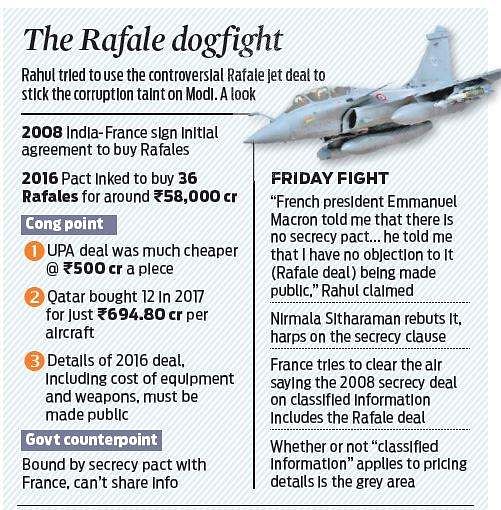 New Delhi: The BJP MPs were on their feet and shouted down Gandhi, forcing an adjournment of the House.  Speaker Sumitra Mahajan, on resumption of the proceedings of the House, cautioned that the tradition of Parliament demanded proof for allegations.

“I’ve no documents before me to substantiate your allegations against Prime Minister. I will check the records and expunge unsubstantiated claims,” she quipped. Gandhi also touched upon issues of demonetisation, unemployment and agrarian distress.

But later, BJP MP Prahlad Joshi served a breach of privilege motion against Gandhi for levelling unsubstantiated allegations against the PM. Union Minister for Parliamentary Affairs Ananth Kumar also told reporters that Gandhi would have to substantiate his allegations.