In a country where a large number of women in rural areas don’t have easy access to sanitary napkins, the decision to keep it under the 12 per cent GST slab has not gone down well with the public.

NEW DELHI: The government’s decision to bring a basic hygiene product like the sanitary napkin under GST has been sharply criticised for many months now. In a country where a large number of women in rural areas don’t have easy access to sanitary napkins, the decision to keep it under the 12 per cent GST slab has not gone down well with the public.

The GST Council is set to meet on Saturday to take a decision on this. Online community platform LocalCircles conducted a poll to ascertain what people think about this decision and what the government should do in this regard. In response, 48 per cent citizens said that sanitary napkins should be exempt from GST, and only 14 per cent said that it should be left at the current rate of 12 per cent GST. Twenty-eight per cent said the GST rate should be lowered to 5 per cent, while 10 per cent said they were unsure about what should be done. The poll received more than 7,000 responses.

The government had earlier said that keeping the Input Tax Credit mechanism in mind, the new tax on sanitary napkins is lower than the earlier rate. It said that earlier there were several hidden taxes which led to sanitary pads having an effective tax rate of 13 per cent over the price. This has now been reduced to 12 per cent by bringing it under the GST. 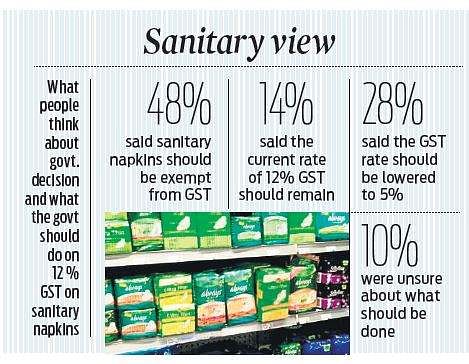 Stay up to date on all the latest Nation news with The New Indian Express App. Download now
TAGS
GST sanitary napkins