There will be civil war, blood bath because of NRC: Mamata Banerjee​ 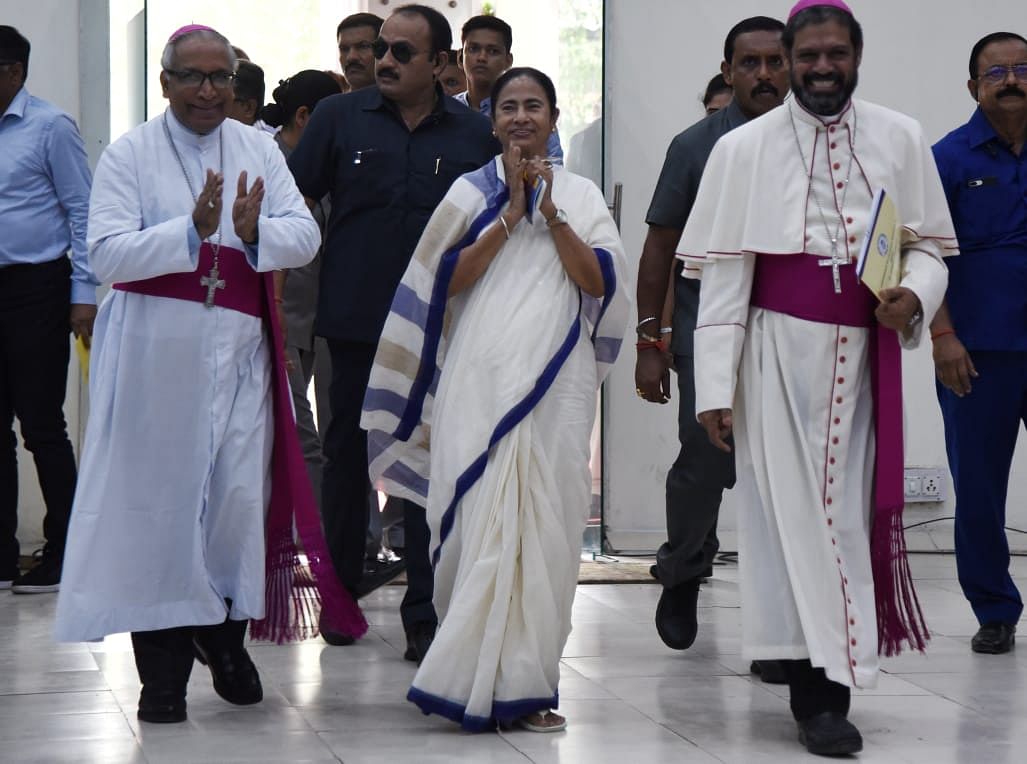 Mamata Banerjee, Chief Minister of West Bengal with Thomas DSouza and others during the attending conclave of 'love you neighbour' in New Delhi. (Photo | Parveen Negi/EPS)

NEW DELHI: Reacting sharply to the BJP’s idea to expand the NRC to her state, West Bengal Chief Minister Mamata Banerjee warned any such move would lead to “civil war” and “bloodbath”.

Speaking at an event here on Tuesday, the Trinamool Congress chief said, “What happened in Jharkhand (child trafficking involving Missionaries of Charities), incidents of lynching, atrocities against Dalits and Muslims… we don’t support this. If it goes on like this, don’t you think it will create a civil war and lead to blood bath?”

Banerjee questioned the ‘audacity’ of BJP to say NRC will next happen in Bengal, saying the saffron party can’t decide who is an Indian and who is not.

Attacking the BJP, she said the saffron party is trying to divide the country and asserted this will not be tolerated.

All citizens are entitled to stay in their country. Something dangerous happened in Jharkhand may happen in Bihar, UP, Rajasthan, Haryana Chhattisgarh and Uttarakhand (BJP-ruled states)... but we won’t let this happen in West Bengal. It won’t happen in Karnataka or Andhra Pradesh either,” she said.

"The NRC is being done with a political motive. We will not let this happen. They (BJP) are trying to divide the people. The situation cannot be tolerated. There will be a civil war, blood bath in the country," Banerjee told a conclave here.

The issue rocked both house of Parliament after which Home Minister Rajnath Singh appealed to the opposition not to politicise the "sensitive" matter as the list has been published on the directives of the Supreme Court and the Centre has "no role" in it.

He asserted that no "coercive" action will be taken against those whose names were excluded from the NRC draft list.

Former PM Manmohan Singh had taken a tough line on the civil war threat during UPA-1.

Mamata Banerjee has warned abt a 'civil war' on NRC issue. When some CM spoke like that during UPA-1, Manmohan Singh let it be known that if state govt cannot maintain law & order, Prez rule would be imposed. The CM shut up.

“Mamata warned abt a ‘civil war’. When some CM spoke like that during UPA-1, Manmohan let it be known that if govt cannot maintain law & order, Prez rule would be imposed. The CM shut up,” tweeted Sanjaya Baru, who was PM’s media advisor.

Now we are on Telegram too. Follow us for updates
TAGS
NRC Assam NRC Mamata Banerjee