The BJP’s loss in nine out of 10 Lok Sabha by-elections ever since it came to power in 2014 appears to confirm the trend of its failing to defend its territory though making gains in rivals' states. 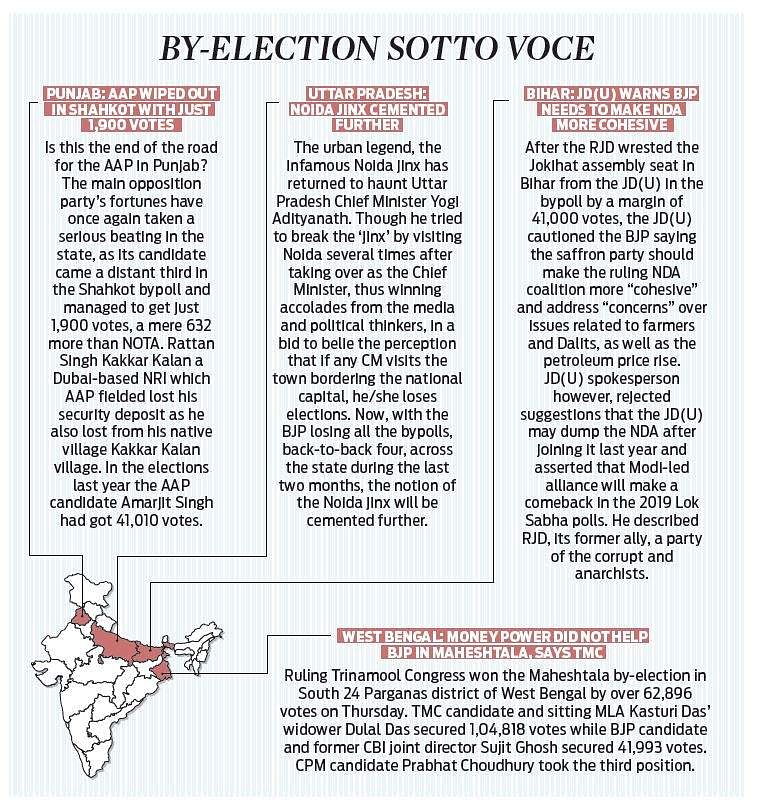 NEW DELHI: The BJP’s loss in nine out of 10 Lok Sabha by-elections ever since it came to power in 2014 appears to confirm the trend of its failing to defend its territory though making gains in states where its rivals face anti-incumbency. It also underscored the possibility of Opposition unity damaging its chances in the 2019 elections.

The BJP’s stunning defeat in the prestigious Kairana Lok Sabha seat in UP to the RLD and in Maharashtra’s Bhandara-Gondia to the NCP became the day’s talking point, though it managed to retain Palghar. Of the 11 Assembly bypolls, the BJP managed a consolation win only in Tharali in Uttarakhand, that too with a wafer-thin margin.

Coming close on the heels of routs in two Lok Sabha by-elections in Rajasthan — Alwar and Ajmer — besides Gorakhpur and Phulpur in UP, the BJP has much to worry about ceding two more Parliamentary constituencies to the rivals.

Some BJP leaders conceded that the party’s attempts to polarise Kairana by stoking a debate on the portrait of Pakistan founder Muhammed Ali Jinnah in Aligarh Muslim University came to nought.

That apart, the BJP lost the Noorpur Assembly seat in UP to the Samajwadi Party. “Jats deserted the BJP in both Kairana and Noorpur,” rued a senior BJP functionary, while adding that “the agrarian distress brought socially rivals – Muslims and Jats – together against the BJP”.

Incidentally, the BJP’s losing streak in the bypolls is in sharp contrast to the party winning a number of state Assembly elections. “The BJP continues to do fairly well in states ruled by the Opposition. But the bypoll losses shouldn’t be brushed aside  since the BJP will soon have to defend big states later this year, besides the next year’s Lok Sabha elections. There are signs of anti-incumbency against the party because of various reasons, including non-fulfilment of promises made during the 2014 Lok Sabha elections,” said a senior BJP leader.

While UP chief minister Yogi Adityanath is seen as an ace campaigner of the BJP being fielded even in Palghar, the party leaders noted his poor electoral show on his home ground. “The factionalism in the BJP’s UP unit isn’t subsiding, which is Yogi’s big challenge,” added the BJP leader.

In Jharkhand, the BJP failed to wrest two Assembly seats – Silli and Gomia - from the Jharkhand Mukti Morcha. The Congress bagged one seat each in Karnataka (RR Nagar) and Punjab (Shahkot) and Meghalaya (Ampatti). BJP’s ally NDPP bagged the Lok Sabha bypoll from Nagaland.

Thursday’s by-election verdict also brought down tally of the BJP in Lok Sabha to 272. But with bypolls yet to be held for three Lok Sabha seats in Karnataka and Anantnag in Jammu and Kashmir, the ruling BJP with two nominated members continues to enjoy majority in the lower House.

By wresting Kairana, Tabassum Hasan on Thursday became the first Muslim member of Parliamant to represent Uttar Pradesh in the Lok Sabha. Though the state’s Muslim population is around 20%, it failed to elect any Muslim MP in the 2014 Lok Sabha elections. Hasan first contested the 2009 Lok Sabha election on a BSP ticket, months after the death of husband Munawwar Hasan in a car crash in Haryana and defeated BJP candidate Hukum Singh.