Union Home Minister Rajnath Singh on Thursday hinted that the Ramzan ceasefire in Jammu and Kashmir could be extended. 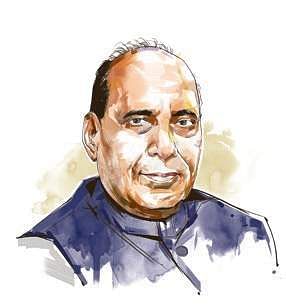 SRINAGAR:  Union Home Minister Rajnath Singh on Thursday hinted that the Ramzan ceasefire in Jammu and Kashmir could be extended. “I will talk to the chief minister and hold security review meetings on the post-ceasefire situation,” he said, adding that “no possibility can be ruled out”.
He, however, condemned the recent militant attacks in the Valley, saying militants were not refraining from nefarious activities even during the holy month of Ramzan.

But, “dialogue can be held with everyone. It is not necessary to hold dialogue only with like-minded people; it’s just that they should be right-minded,” the home minister said on talks with separatists. “The special representative (for holding sustained dialogue with all stakeholders in J&K) has not been appointed for sightseeing. He has visited the state 11 times so far. Anyone desirous of engaging in dialogue should meet him.”

Singh further appealed against ruining the future of the youth by using them for political gains. Children were misled into stone-pelting and committed mistakes, he said. “It was because of this that the government decided to provide amnesty to 10,000 first-time stone-pelting offenders in the Valley,” Singh explained, referring to the state’s decision last November, which was recommended by the Union home ministry.

Taking a veiled dig at Hurriyat leaders, he said, “If they were educating their own children, why were they provoking the Kashmiri youth to pelt stones and pick up guns? Do they want Kashmiri children and youth to only play with stones and fire?”

Singh recalled that Prime Minister Narendra Modi, in his Independence Day speech, said the government wants a solution to the Kashmir problem not by firing bullets, but by embracing people. “And when we talk about Kashmiriyat, it includes Hazratbal as well as Amarnath.”
The Home Minister is on two-day visit to Jammu & Kashmir.

Now we are on Telegram too. Follow us for updates
TAGS
Rajnath Singh ceasefire Ramzan

No playground to call their own, but these tribal students in Mayiladuthurai make a mark in sports

US Soccer equalizes pay in milestone with women, men

Man charged in Buffalo massacre due back in court