NEW DELHI: Concerned over slow job growth and poor employment generation, the National Democratic Alliance government plans to provide the Mudra loan benefit to the skilled workforce trained under the Skill Development scheme. According to the proposal, individuals having skill training certificate will be given loans under the Mudra scheme to start business. 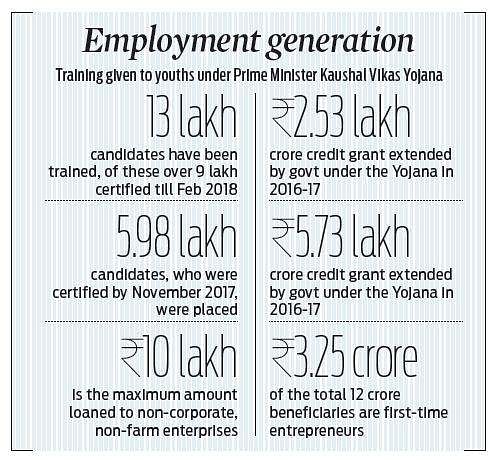 Even in its fourth year in officer, the Narendra Modi-led NDA government is facing criticism for poor employment generation and job creation in the country. Worse, lakhs of people are unemployed even after skill training under the Skill Development scheme.

With the new initiative, the government aims at improving employment situation by providing loans to the skilled workforce in the country. “Even if a skilled person doesn’t get job, s/he can start own enterprise. It will also create more employment opportunities for others,” said an official of the Skill development ministry.

The official said the plan to extend the Mudra loan benefit to the skilled persons was discussed with the Finance ministry. The initiative will be  a collaboration between the Department of Financial Services in the Finance Ministry and the Ministry of Skill Development and Entrepreneurship.
To create an army of trained workforce, the government under its ‘Skill India’ mission had launched the Prime Minister Kaushal Vikas Yojana (PMKVY) in July, 2015. For proper implementation of the Skill India Mission, a separate ministry — the Ministry of Skill Development and Entrepreneurship —was also formed.

But, the results were far from satisfactory. In a recent meeting with the Mudra beneficiaries, Prime Minister Narendra Modi had said that Mudra has created opportunities for self-employment and is acting as job-multiplier. “Out of the 12 crore beneficiaries, 28 per cent or 3.25 crore are first-time entrepreneurs,” he told beneficiaries of this scheme.

Modi had said 74 per cent, or 9 crore, borrowers are women and 55 per cent belong to the Scheduled Caste /Scheduled Tribe and Other Backward Class categories. “Mudra Yojana is not just a self employment scheme but it acts as job multiplier as it has created jobs as several new ventures got started,” he said.

Now we are on Telegram too. Follow us for updates
TAGS
mudra