Pranav Goyal from Panchkula all Indian topper in JEE Advanced 2018

Meenal Parekh from Kota in Rajasthan is the topper among girls with 318 marks. 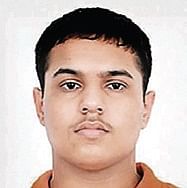 Pranav Goyal from Panchkula in Haryana.

CHANDIGARH: The results for the 2018 Joint Entrance Examination (JEE) Advanced for admission to IITs were announced on Sunday with Pranav Goyal from Panchkula in Haryana bagging the top rank, scoring 337 marks out of 360.

The second position was secured by Kota’s Sahil Jain while Delhi’s Kailash Gupta got the third spot. Meenal Parekh from Kota in Rajasthan is the topper among girls with 318 marks.
The 17-year-old Pranav Goyal’s next aim is to take admission in IIT-Mumbai and then do his MBA.

An alumnus of Bhavan Vidyalaya in Panchkula, who hails from a family of businessmen and businesswomen, Pranav left for Hyderabad with his family after the result was declared on Sunday.
Pranav’s mantra of success is focus, maintaining balance and remaining calm so that long hours of study do not perturb him and, of course, faith in his teachers.

“Solving old question papers helped me a lot in getting an insight into the pattern of the examination,” said Pranav, who used to study five hours daily for last one year, as clearing  JEE Advanced was his target.  “My aim is to take admission in IIT-Mumbai and after that, I will pursue MBA and go for entrepreneurship.”

However, it’s not all work and no play for the teenager who watches cartoons on television plays chess and reads books to beat stress.  Pranav who had scored had scored 97.2 per cent in the Central Board of Secondary Education  (CBSE) Class 12 exams, is inspired by his father and wants to be a successful entrepreneur like him.

Now we are on Telegram too. Follow us for updates
TAGS
Panchkula JEE Advanced IIT-JEE Joint Entrance Examination Advanced Haryana