Around nine months ago, the victim had filed a case against the accused alleging that he had raped their 13-year-old daughter. Subsequently, he was arrested and sent to a jail.

GUWAHATI: A rape accused hacked his wife, who had indicted him of raping their minor daughter, to death at the premises of an Assam court on Friday.

The incident was reported from the district and sessions court in Upper Assam's Dibrugarh. Purno Nahar Deka, 35, from Joypur area in Dibrugarh district was arrested. 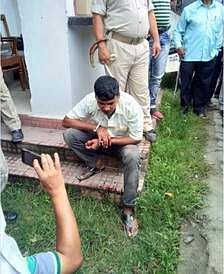 "Reeta Nahar Deka, 28, had come to the court in connection with the hearing of the rape case and was waiting outside the courtroom at a veranda. Suddenly, the accused attacked her on the neck with a ‘kotari’ (knife-like weapon). The profusely-bleeding woman was rushed to the Assam Medical College and Hospital but she succumbed to her injuries," inspector Siddeswar Bora told TNIE.

Around nine months ago, Reeta had filed a case against Purno that he had raped their 13-year-old daughter. Subsequently, he was arrested and sent to a jail. He was out of jail on bail but he did not go home.

"The accused told us that he was angry that Reeta had levelled a false charge of rape against him. He was also angry that she did not visit him when he was languishing in jail," the police officer said.

The accused would be produced in a court on Saturday following medical examination, he added.

Now we are on Telegram too. Follow us for updates
TAGS
Hacking Rape accused Assam court