Some Rising Kashmir staff members went to Kreeri in Baramulla, Bukhari’s native place, for the funeral while editors and other staff stayed back. 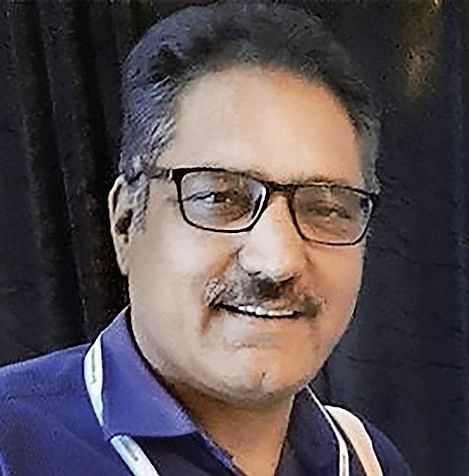 SRINAGAR: It was a normal day at work in the office of Rising Kashmir on Thursday evening. Three editors were in the newsroom in the newspaper’s office at Press Enclave at Lal Chowk, doing their routine work, when they heard quick bursts of fire around 7 pm.

“Initially, we thought it was firecrackers since Eid was just two days away. Then, one of our colleagues said it was not the sound of crackers, but gunfire,” Faisul Yaseen, Associate Editor of the English language daily, told Express.

“We rushed down to the second floor and looked through window to assess the situation. We were left motionless and speechless by what we saw. The vehicle of our Editor-in-Chief, Shujaat Bukhari, had come under heavy gunfire; all its windowpanes were smashed and three people inside were lying motionless,” he said.

Faisul and other staff members rushed down and found Bukhari and one of his personal security officers, Hameed, lying still in pool of blood in the vehicle. Both had died on spot while another PSO, Mumtaz, was critically injured. He was rushed to the hospital but succumbed later.

As Bukhari’s and Hameed’s bodies were taken to the Police Control Room. According to doctors at PCR, Bukhari’s body had 16 bullet wounds. The bullets were shot from point-blank range. After the medico-legal formalities were completed, Bukhari’s body was handed over to his family.

Some Rising Kashmir staff members went to Kreeri in Baramulla, Bukhari’s native place, for the funeral while editors and other staff stayed back.

“Since we were in shock and grief, it was initially decided not to take out the edition the next day. But then we realised that the best tribute to Shujaat will be to come out with the edition,” said Faisul.

However, the team decided to come up with eight pages instead of usual 16. Faisul said normally they used to close the edition by 10.30-11 pm during Ramzan. “But on that day... it went on till 2 am,” he said.

No one complained, despite the fact that people had to wake up again at 3 am to have the sehri (pre-dawn meal), he added. The next day’s edition of Rising Kashmir carried an 8-column banner headline, ‘Shujaat Silenced’.

Now we are on Telegram too. Follow us for updates
TAGS
Shujaat Bukhari Rising Kashmir