Of the 41 trips by Modi to 52 countries, the highest amount was spent on his nine-day tri-nation visit to France, Germany and Canada.

BENGALURU: In his 48 months as Prime Minister, Narendra Modi made 41 trips to over 50 countries, at a total cost of Rs 355 crore.  He was abroad for a cumulative 165 days.

This was revealed through replies to Right to Information (RTI) queries submitted to the Prime Minister’s Office (PMO) by RTI activist Bhimappa Gadad, who shared these replies with The New Indian Express. 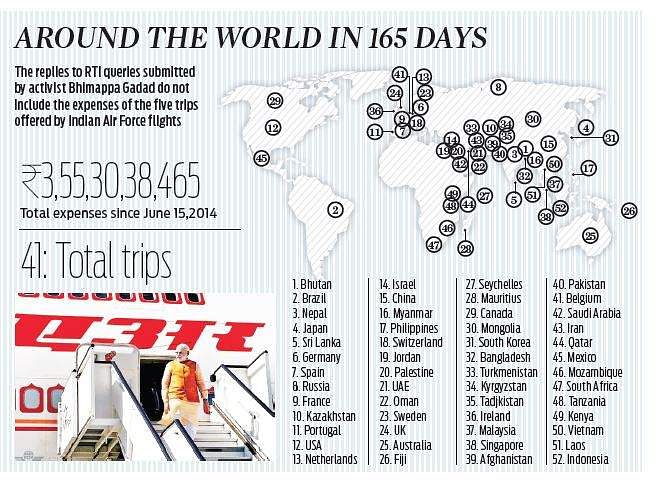 He is bitter about the PMO not providing information on domestic travels of the Prime Minister. “They have not furnished details of domestic visits and expenses for security provided during the visits. I did not ask for details of security measures. I just asked for the expenses, but they refused, saying the SPG security organisation, which takes care of PM security, is exempted from the purview of RTI,” he said.

“Though I got the information out of curiosity, I want it to reach the public. Everyone should know about it,” he said, adding that the Centre should also release reports on the benefits to the country emerging from these visits.

Now we are on Telegram too. Follow us for updates
TAGS
PM Modi