Sunil Deodhar, a former RSS pracharak and the BJP point man in Tripura, tells Prasanta Mazumdar how he managed to unnerve the CPI-M and became its sole target of attack as he drew more and more disgru

Sunil Deodhar, a former RSS pracharak and the BJP point man in Tripura, tells Prasanta Mazumdar how he managed to unnerve the CPI-M and became its sole target of attack as he drew more and more disgruntled people into the party fold

It was quite a journey for a non-Bengali in Tripura under the brand name ‘Modi doot’. It ended in the BJP being in a straight contest with the wellentrenched CPI-M in a state where the saffron party was virtually nonexistent four years ago. Sunil Deodhar, a former pracharak of the Rashtriya Swayamsevak Sangh (RSS), was the point man for the BJP in red Tripura. He and his party have all but erased that red. In an interview with The New Sunday Express, the 53-year-old, who hails from Maharashtra and was Prime Minister Narendra Modi’s poll manager in the 2014 Lok Sabha elections, speaks about how the BJP made inroads into Tripura. Excerpts from the interview:

How was this turnaround possible? 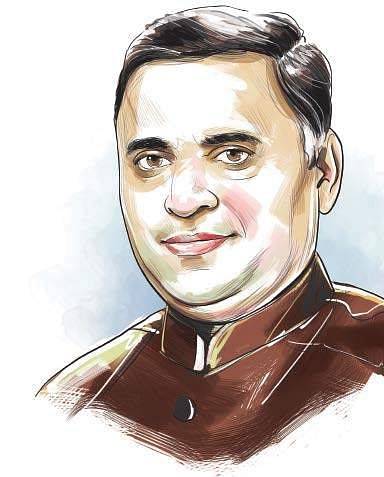 People had for long been seeking an honest Opposition. They wanted to get rid of the CPI-M government but the absence of a strong Opposition saw them getting frustrated. This was evident in the 2013 elections, when 45 per cent of the people voted for change. When I came here as ‘prabhari’ and saw the electoral scenario of 2013 (Assembly polls) and 2014 (parliamentary elections), I could understand that people wanted change but they did not have faith in the Congress.

When I came, I was told not to be critical of Chief Minister Manik Sarkar as he is a nice man. So, for the first six months, I said nothing against him in my speeches. But later when I started speaking against him, people liked it. I realised they were upset with his government. So, they found in the BJP a platform to express their anger against the misrule of the Left Front government.

I was the only person to attack Chief Minister Manik Sarkar and the CPI-M directly. Unlike me, other Opposition parties, including the Congress, used to take a detour to criticise the Left Front. If you see the campaigning of the CPI-M and their handling of social media, you will see I was their sole target. They used to go after me, not the BJP. They were angry because months after my arrival, many people who belonged to their fold, including people of their trade union, workers’ union and officers’ union, started embracing the BJP.

These people gave me papers on scams and scandals of the Left Front government. When I started speaking up on them, the Left Front government’s worries started increasing. They started calling me ‘Goru Dhar’, not Sunil Deodhar. They also used to say a subedar has been sent from Maharashtra and that I am an outsider. But people were not bothered. They believed the BJP could bring change. We started with the slogan ‘chalo paltai’ and soon it became their slogan. People in buses and trains started greeting one another by chanting the slogan.

How did you draw people to the BJP?

There was an environment against the CPI-M in rural areas. I used to get messages that around 100 people of a village want to join the BJP. There were instances of people joining the BJP at six-seven places on a single day. I used to be at one place and I would send others to the other places. During subsequent interactions, we used to identify people with leadership qualities. Then, we would empower them and give them responsibility. They would start working and soon, they would be invited to attend training camps or state-level meetings etc. Today, wherever in Tripura there is a CPI-M flag, you will find a BJP flag too.

What was your ‘Modi Doot’ Yojana?

‘Modi Doot’ is my brainchild. It was a group of 25 to 30 youngsters. Every morning, they would catch shuttle trains wearing Modi Tshirts and distribute brochures to passengers about what the Modi government has done, along with a form, to be filled in by them, for a survey. We could not do it in villages as people were afraid of being watched by CPI-M workers. But they had no fear in trains as all were strangers. So every day, we received the data of around 500 to 700 people. We had a call centre and it used to contact them.

We used to try to learn their problems and then share them with our people in the village or constituency where they were from. People could not believe that the workers of a party who contacted them in trains would follow it up by trying to solve their problems. What did Amit Shah tell you when you were sent to Tripura in 2014? Amit Shahji told me we are working for a Congress-mukt Bharat and you have to achieve a CPI-M-mukt Bharat.

Those days, the CPI-M was not in power in Kerala. I had specifically told Amit Shahji to give me the responsibility of a state in the Northeast. When I first came to the region in 1991 as an RSS pracharak, I got emotionally integrated with it. I had started an NGO, My Home India, and it was in the interests of people of the Northeast. I was more interested about Meghalaya, where I spent eight years and can speak the local language, but I was given the responsibility of Tripura. I was told that when polls will be held in three years’ time, there will be an anti-incumbency of 25 years. I was told to strengthen the organisation.

How do you he feel when you see the BJP’s giant strides in the Left bastion?

I feel my challenges have now increased as people’s expectations have increased. For 25 years, their aspirations remained unfulfilled. However, it will be difficult for any government to fulfil such accumulated aspirations overnight. I am not a person to run the government, yet I will strive to ensure that whosoever is in power delivers the goods to the people. I am not leaving Tripura. I will be here for the next two to three years and ensure that whatever promises we made are fulfilled.