These incidents come after two statues of Russian communist revolutionary Vladimir Ilyich Ulyanov or Lenin, were knocked down in Tripura’s Belonia town on Tuesday morning.

In the latest report in a series of vandalism attacks on statues of prominent figures, a bust of Dalit icon Ambedkar was damaged in Meerut’s Mawana Khurd in Uttar Pradesh in the early hours of Wednesday. Also, a bust of Jan Sangh founder Dr Syama Prasad Mookerjee was blackened and vandalised at Keoratala Crematorium in Kalighat.

These incidents come after two statues of Russian communist revolutionary Vladimir Ilyich Ulyanov or Lenin, were knocked down in Tripura’s Belonia town on Tuesday morning. The statue was brought down by suspected BJP workers celebrating their party’s victory in the Assembly elections, ending the 25-year rule of the Left Front in the state.

Soon after, Tamil Nadu BJP leader H Raja threatened on social media that statues of Dravidian icon and social reformer 'Periyar' too would be pulled down, just like Lenin's. Hours after his post (which he deleted due to backlash from Opposition parties) two men vandalised a Periyar statue at a municipal corporation office in Vellore on Tuesday night. The party today expelled party worker R Muthuraman, who was arrested on Tuesday for damaging Periyar’s bust in Vellore.

HERE ARE ALL THE DEVELOPMENTS

“The post regarding the Periyar statue was posted without my consent. So, later, I removed the post. We should counter views with views and not with violence.  I don't have any intention to hurt the feelings of anyone. If my post had hurt anyone, I express my whole hearted regret. Further, damaging the statue of Periyar is not acceptable to us,” Raja said in his FB post today. 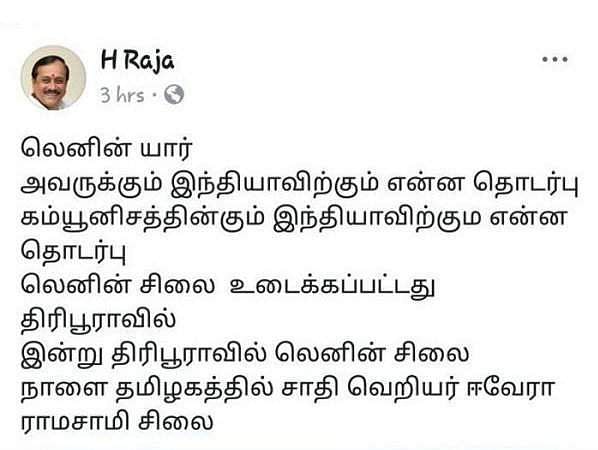