The sunny optimism of Tripura was wiped out for the BJP by demoralising losses in two high-value Lok Sabha constituencies in Uttar Pradesh - Gorakhpur and Phulpur - and one in Bihar, Araria.

NEW DELHI: The sunny optimism of Tripura was wiped out for the BJP by demoralising losses in two high-value Lok Sabha constituencies in Uttar Pradesh - Gorakhpur and Phulpur - and one in Bihar, Araria. Both the UP seats were won by a new partnership between the Samajwadi Party and the BSP, who have buried an intense rivalry of two decades.

The shock value is high because Gorakhpur is Yogi Adityanath’s home turf—he was a five-time MP from the constituency that houses his Gorakhnath ashram. The by-election was necessitated by his shifting to Lucknow as chief minister. Phulpur, similarly, is the constituency vacated by Yogi’s deputy CM, Keshav Prasad Maurya.

The loss seems dramatic also because the BJP had won both seats by a huge margin of over 3 lakh votes in 2014. But the last-minute alliance stitched up by Mayawati, Akhilesh Yadav and Ram Gopal Yadav wrested Gorakhpur with a margin of over 21,000 votes and Phulpur (59,000 plus) for the SP.

This success for the new parivar of bua, bhanja and chacha — the former UP CM calls the BSP supremo bua (paternal aunt), placing her on the same pedestal as chacha (paternal uncle) Ram Gopal for nephew Akhilesh—now sets it up as a new potential alliance that may pose a serious challenge to the BJP all over Uttar Pradesh in 2019.

If UP was a rude shock for the BJP, Bihar was a wake-up call too. RJD supremo Lalu Prasad Yadav is in jail and campaigning had to be led by his son, young Tejashwi. Yet he pulled it off in the face of the NDA that rules in both the state and the Centre.

Araria is an RJD stronghold with a strong Muslim demographic. So the JD(U) cleverly left the seat for BJP, which ended with egg on its face.

The Gorakhpur result also casts a cloud on the shining future that was envisaged for Yogi — the party uses him as a national icon for campaigning. But he cannot be an alternative to Modi if he cannot even hold on in his backyard.

As a party, the Congress cannot take much cheer from the day’s news. Its candidates were not able to even save their security deposits in Phulpur (which holds much value for it as Jawaharlal Nehru’s former constituency) and Gorakhpur. A defeated candidate loses his security deposit if he/she fails to secure more than one-sixth of the total votes.

But the party was trying to find cause for cheer in the BJP’s losses. Congress spokesman R S Surjewala tweeted that the BJP’s report card for 2017-18 is 0/10. It has lost all 10 Lok Sabha by-elections in these two years—Amritsar, Srinagar, Malappuram, Gurdaspur, Ajmer, Alwar, Uluberia, Gorakhpur, Phulpur and Araria. This, the party says, is a clear message that people are angry with the BJP for its “arrogance and misrule”.

There’s also much debate on whether the BJP has actually come down to 271 (minus rebels Kirti Azad and Shatrughan Sinha) in the Lok Sabha. Both are formally still with the party. The Lok Sabha website still says 274, plus the Speaker.

Shiv Sena MP Sanjay Raut claimed the BJP suffered in UP bypolls because of  SP leader Naresh Agrawal’s induction into the saffron party. “I don’t consider that the SP-BSP tie up has worked. I believe that Lord Ram was angry with you (BJP) the day you (BJP) rolled out the red carpet for the SP leader, who has criticised Lord Ram,” he said. 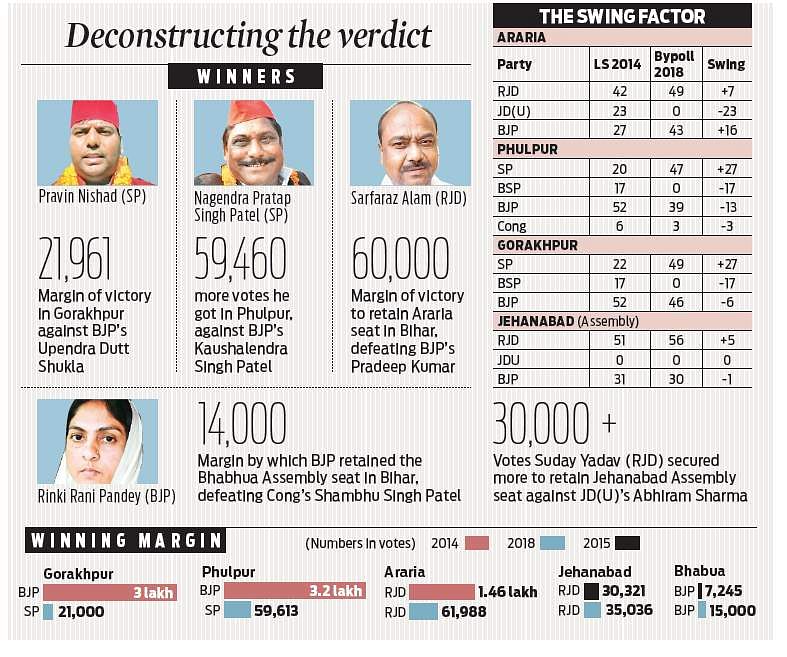