Although the two no-trust motions moved by the TDP and the YSR Congress could not be taken up in the Lok Sabha on Friday, the BJP has come under pressure to keep the alliance together.

NEW DELHI: the dramatic exit of the Telugu Desam Party (TDP) from the National Democratic Alliance (NDA) has set the proverbial cat among the pigeons with the Shiv Sena and Shiromani Akali Dal (SAD) taking potshots at the one-upmanship of the ruling BJP.

Although the two no-trust motions moved by the TDP and the YSR Congress could not be taken up in the Lok Sabha on Friday, the BJP has come under pressure to keep the alliance together.

Following a teleconference by Naidu with the party MPs, the TDP officially exited the NDA on Friday.

Subsequently, the Parliamentary party in a meeting on Friday morning decided to move a no-confidence motion against the Narendra Modi-led government on grounds that the special category status as promised to Andhra Pradesh was denied by the Centre. The YSR Congress had already submitted a notice for no-confidence motion on Thursday.

SAD’s Naresh Gujral, too,  dropped hints of fissures in the NDA ranks saying, “The allies should be treated better. The TDP still could be brought back onboard if the BJP addressed the concerns of Andhra.”

The BJP’s two allies from Bihar – Rashtriya Lok Samata Party and Hindustani Awami Morcha – were apparently inching closer to the RJD. In UP, Apna Dal MP and minister Anupriya Patel is, sources said, sulking and her staying away from campaigning in the Gorakhpur and Phulpur bypolls has also been noted.

The two no-confidence motions couldn’t be taken up for consideration in the Lok Sabha as pandemonium prevailed in the House with Telangana Rashtra Samiti (TRS) and the AIADMK MPs raised slogans in the well of the House over special status for Andhra Pradesh and Cauvery Management Board, respectively.  Speaker Sumitra Mahajan stated the House must be in order for the no-trust motions to be considered.

While the Opposition parties – the Left, Trinamool Congress, and the Congress – are also supporting the non-trust motions, there is no immediate threat to the ruling NDA. Even if rebel ally Shiv Sena breaks away, the NDA will still have 295 MPs on its side to easily defeat the no-trust motions. 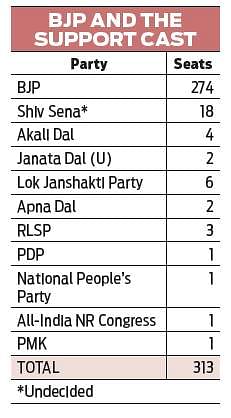