The Congress will defeat the BJP/RSS and come to power in 2019, party chief Rahul Gandhi asserted in his address at the conclusion of the plenary as he promised to revamp the 133-year-old party.

NEW DELHI: The Congress will defeat the BJP/RSS and come to power in 2019, party chief Rahul Gandhi asserted here on Sunday as he promised to revamp the 133-year-old organisation. “There is a clash of ideologies. Our ideology is going to win,” he said in his concluding address at the party’s 84th plenary session.

Noting that people believed Narendra Modi in 2014, Rahul said their trust had been broken as the Prime Minister colluded with crony capitalists like Punjab National Bank fraud accused Nirav Modi and former IPL boss Lalit Modi and ma­d­e the poor suffer through demonetisation. “Modiji has stopped we­aring suits. He is now worried as he was barely able to scrape through in Gujarat polls and may get stuck in 2019,” he said. 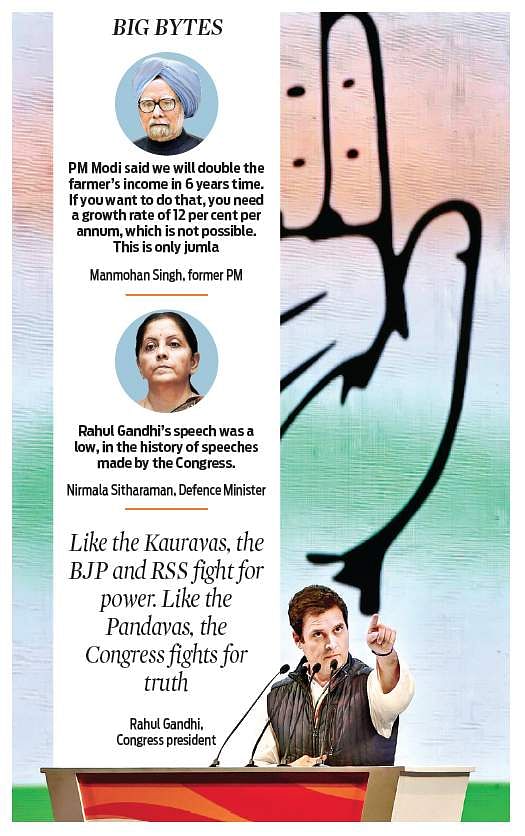 Reflecting on the Congress losing the 2014 national polls, he said the last few years of the previous UPA government “did not stand up to the people’s expectations and they felt let down”. “We accept our mistakes but they don’t. Modiji thinks he is an avatar of god,” he said.

Amid loud cheers, Rahul promised to break the walls that separate the leaders and the workers while saying he would open the party platforms for talented youth. He, however, assured the elders would not be brushed aside in the process. “I admit there’s a wall between the Congress leadership and party workers. My first priority is to break this barrier but with respect,” said Rahul.

Paratroopers who are able to get party tickets using money and influence won’t be able to do so as priority will be given to the loyal workers, the Congress chief said citing the example of Gujarat polls where first timers gave the BJP a tough time. “We gave tickets to Congress workers in Gujarat and Modiji was seen flying in a seaplane. When we truly empower Congress workers, Modi will be seen in a submarine,” he said.

Taking a dig at Modi, Rahul said: “There are no jobs, the farmers are dying. But the Prime Minister says, ‘Let’s go do yoga’.” Listing out his 2019 agenda, Rahul said jobs were the biggest problem facing the country and only the Congress would be able to address it.

Former prime minister Manmohan Singh slammed the Narendra Modi government for messing up the economy and said the BJP leader had failed to deliver on his poll promises.

“The BJP government has messed up the economy. When Modiji was campaigning (in 2014), he made lots of tall promises. Those promises have not been fulfilled,” Singh, an economist, said at the 84th Congress plenary session here on Sunday.

“He said we will provide two crore jobs; we have not seen even two lakh jobs,” he said.

Singh, who had said demonetisation would dent the GDP by 2 per cent, pointed out that note ban and a faulty GST dealt a body blow to the economy. “The ill-thought and ill-considered move with regard to demonetisation and hastily put forward legislation of GST has destroyed many jobs,” he said.

Noting that Modi had promised to “double farmers income in six years”, Singh said the economy needed to grow at 12 per cent for that, which was unthinkable. “It is one of those statements which is a jumla (rhetoric),” Singh said.

The Congress resolution on economy passed at the plenary session too reiterated the abysmal economic management of the Modi government has resulted in lack of jobs for millions, stagnant real incomes for farmers, collapse of the manufacturing sector, destruction of micro, small and medium businesses, paralysis of India’s banking sector, a severe dent in business confidence and rising inflation expectations of households.

“The economy is in the hands of ignorant and incompetent policy makers who have derailed economic growth through reckless and bizarre policies,” it said.

Another resolution passed on foreign policy said, “The BJP government has no roadmap and its Pakistan policy has been a disaster. Review of the policy is overdue.”

“We must recognise that Pakistan is our neighbour. Both countries must sit together to iron out issues,” the former prime minister said.

Slamming Modi for pursuing a personal foreign policy, the Congress resolution said “the government is carried away by its own propaganda, and has mismanaged India’s relations with major partner countries… the rapid rise of China and its emergence as a major power, is and will continue to be a significant factor for India”.

Stay up to date on all the latest Nation news with The New Indian Express App. Download now
(Get the news that matters from New Indian Express on WhatsApp. Click this link and hit 'Click to Subscribe'. Follow the instructions after that.)
TAGS
Rahul Gandhi Sonia gandhi UPA AICC INC nirav modi PNB fraud Congress plenary