They sought the scrapping of 20 per cent quota and jobs for locals in all states to those candidates who clear the All India Railway Act Apprentice Exams.

MUMBAI: A flash agitation by job-seekers over issues pertaining to railway recruitment has culminated in a rail-blockade, police caning and retaliatory stone-throwing leading to a virtual paralysis of the Central Railway suburban train services here on Tuesday.

For nearly three hours, the services were severely disrupted as the protestors squatted and laid on the railway tracks between Matunga and Dadar.

According to the latest information, the services are now resumed. After the intervention of top CR officials and the Railway Ministry with a written assurance to the protestors, the agitation was finally withdrawn at around 10.45 a.m.

However, the agitating railway job aspirants are still present at the spot where they have been protesting, between Matunga & Chhatrapati Shivaji Terminus railway station.

Confirming that agitators have called off their protest, Railway minister Piyush Goyal told ANI that further discussions will be held. "Recruitment in Railways is underway at a large scale. On directives of the Supreme Court, Indian Railways has made a recruitment policy that is unbiased and transparent," he said. Maharashtra CM Devendra Fadnavis was quoted by ANI as saying, "Was in continuous touch with officials. No rules have changed, 20 per cent seats are reserved for apprentices but they are demanding more. Lathi-charge was done after agitators started pelting stones, no one was injured."

More than 4.5 million commuters were badly hit for the second consecutive day following a strike called on Monday by drivers of cab aggregators and app-based taxis that disrupted in Mumbaikars' schedules.

"There is no provision of giving jobs to the apprentices as per the Apprentice Act. They are given only training of a specified period to improve their skills and experience of having worked in the field. However, Ministry of Railways have taken a decision and reserved 20% of the seats filled through direct recruitment.  The notification is already issued with last date of submitting application as 31.3.2018. Apprentices can apply against this notification and Special Examination will shortly be held for Apprentices who have done training in Railway Workshops under Apprentices Act," the Central Railways stated in an official communique. 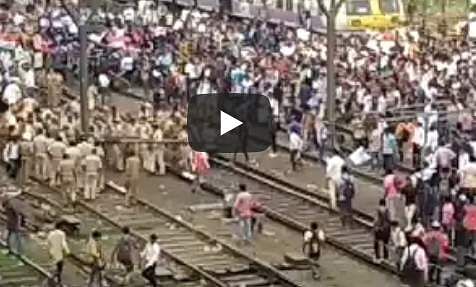 Meanwhile, in an attempt to restore normalcy, the local police had to resort to a mild lathi-charge to disrupt the protestors. Some retaliated by pelting stones at the police.

At least five persons and a couple of police personnel were injured in the fracas even as top police and railway officials rushed to the site to control the situation.

What is the protest about?

The protests were carried out by activists of the All India Act Apprentice Association (AAAAA). It demanded scrapping of the 20 per cent quota in favour of a higher one and sought jobs for locals in all states to those candidates who clear the All India Railway Act Apprentice Exams.

They claimed they had taken up their demands right upto the Railway Minister Piyush Goyal who met them but there was no progress in the matter.

A Shiv Sena MP from Mumbai Rahul Shewale met top CR officials to resolve the matter and later said that the railways would hire over 12,400 candidates who have cleared their apprenticeship exams.

Meanwhile, the BEST has deployed extra buses to ferry commuters to and fro from various points.

The agitation on the Central Railway had a cascading effect even on the Western Railway with all trains running packed to capacity.

The protests disrupted the entire suburban and long distance railway schedules in Mumbai, Thane, Palghar, Raigad and Pune with commuters stranded for hours.

College students who started their University of Mumbai's BA, B.Com and B.Sc. examinations on Tuesday were also affected. The university permitted an hour's extension for students to reach the exam halls.

The opposition Congress and Nationalist Congress Party have demanded a discussion on the issue in the Maharashtra Legislature on a priority basis.

Mumbai's famous Dabbawalas were also stranded at various CR stations right from Kalyan in Thane to Dadar in Mumbai.

(With inputs from Express News Services and agencies)

Stay up to date on all the latest Nation news with The New Indian Express App. Download now
(Get the news that matters from New Indian Express on WhatsApp. Click this link and hit 'Click to Subscribe'. Follow the instructions after that.)
TAGS
Mumbai Rail Roko Railway jobs demanded Matunga Dadar railway tracks block apprentice agitation