Counting of votes for the 2018 Rajya Sabha elections began today evening after polling successfully ended for the day amid allegations of foul play in various states.

Counting of votes for the 2018 Rajya Sabha elections began today evening after polling successfully ended for the day amid allegations of foul play in various states.

The polls to Rajya Sabha, which will have 58 vacancies in April, began today. Voting to fill 25 of 58 Rajya Sabha seats which fell vacant took place in Uttar Pradesh, West Bengal, Karnataka, Jharkhand, Chattisgarh, and Telangana.

A bypoll was also held for one seat in Kerala where MP Veerendra Kumar, the Left-backed candidate of Sharad Yadav faction of the JD(U), is pitted against Babu Prasad of the Congress. Kumar had resigned from the Rajya Sabha to protest against Bihar CM Nitish Kumar's decision to return to the NDA.

Congress has won 3 Rajya Sabha seats and BJP has won 1 seat in Karnataka.

Earlier, ECI had received a complaint from Jharkhand Vikas Morcha alleging Prakash Ram did not show his ballot paper to the party's authorised representative after casting vote.

Telangana's ruling Telangana Rashtra Samithi (TRS) bags all three Rajya Sabha seats of the state for which polling was held .

The Trinamool Congress bagged four seats and the Congress one in the Rajya Sabha polls from West Bengal.

Counting of votes for Rajya Sabha elections in Karnataka begins after being delayed due to allegations of discrepancies.

Counting of votes for Rajya Sabha elections in Uttar Pradesh begins after clearance from the Election Commission.

I am at the seventh heaven of delight. This is the brain child of CM Mamata didi. I am very hopeful that I will live up to her expectations: Abir Ranjan Biswas, TMC after winning the Rajya Sabha seat. #RajyaSabhaElections #WestBengal pic.twitter.com/ZEhbYQyFQr

Counting of votes has not started in Karnataka as yet because Janata Dal had complained to EC about some discrepancy. Janata Dal has boycotted the voting now, so that will also enhance our chances of victory, says G Parameshwara, Congress.

SP and BSP demand Election Commission to declare votes of BJP's Nitin Agrawal and BSP's Anil Singh invalid alleging that they did not show their ballot paper to the polling agent.

The ECI has received a complaint from Jharkhand Vikas Morcha for cancellation of vote of Prakash Ram, who cross-voted. Further action will be taken by the Commission only after receiving Returning Officer's report. Prakash Ram has meanwhile been suspended by his party.

BJP will win in other states as well under the leadership of PM Modi and party president Amit Shah: Saroj Pandey, BJP pic.twitter.com/7ZlD2m8cJn

Election Commission has not given permission to begin the counting of votes for the Rajya Sabha election in Uttar Pradesh due to some objections in ballot papers. Counting to begin only after EC gives clearance.

Counting of votes underway for the 2018 Rajya Sabha elections.

All the 9 candidates of BJP will win. SP insulted their worker and people will answer them for choosing a candidate that entertains the society rather than one who serves the society, Naresh Agrawal's son Nitin Agrawal to ANI.

The election in Kerala is being held after the seat fell vacant when Veerendra Kumar resigned from the Upper House of Parliament as a mark of protest following JD(U) leader Nitish Kumar joining hands with BJP-led NDA.

Voting underway at #Kerala Legislative Assembly in Thiruvananthapuram for one #RajyaSabha seat from the state pic.twitter.com/eMVXwQLJ5i

I have voted for BJP, I don't know about the rest: Anil Singh, BSP MLA to ANI. [FULL REPORT]

Voting for two Rajya Sabha seats from Jharkhand, for which two candidates of BJP and one of Congress are in the fray, is being held today in the Assembly premises.

Voting underway at Chhattisgarh Legislative Assembly in Raipur for one Rajya Sabha seat from the state.

In Telangana, three TRS and one Congress candidate are in fray. BJP, TDP and CPM to not vote.

#Visuals from Telangana assembly ahead of voting for three #RajyaSabha seats from the state pic.twitter.com/Uh3atyBHil

BJP will win all the nine Rajya Sabha seats where we have fielded our candidates. Nine more BJP candidates will make entry to Rajya Sabha from Uttar Pradesh this time: Deputy Chief Minister Keshav Prasad Maurya to ANI.

Speaking to ANI, Ram Gopal Yadav of Samajwadi Party said, "There will be no cross-voting, but yes BJP MLAs will cross-vote in our favour."

Kolkata: MLAs queue up at the state assembly to cast their votes for #RajyaSabhaElections, 5 seats are being contested from West Bengal. pic.twitter.com/ODHVpYYHPW

CM Yogi Adityanath meets party MLAs at the UP assembly.

SP candidate Jaya Bachchan Ji and BSP candidate, (Bhim Rao Ambedkar) whom we are supporting, will win the  Rajya Sabha elections. Considering BJP's condition I'd say that its own MLAs are annoyed & some of them may even end up siding with the opposition: Rajendra Chaudhary, SP to ANI.

The BJP has filed 18 candidates for the biennial polls. They include Anil Baluni, the national head of the BJP's media wing, from Uttarakhand and Saroj Pandey, BJP general secretary, from Chhattisgarh. The BJP has also fielded Union Petroleum and Natural Gas Minister Dharmendra Pradhan and Union Social Justice and Empowerment Minister Thawar Chand Gehlot from Madhya Pradesh for another Rajya Sabha term. 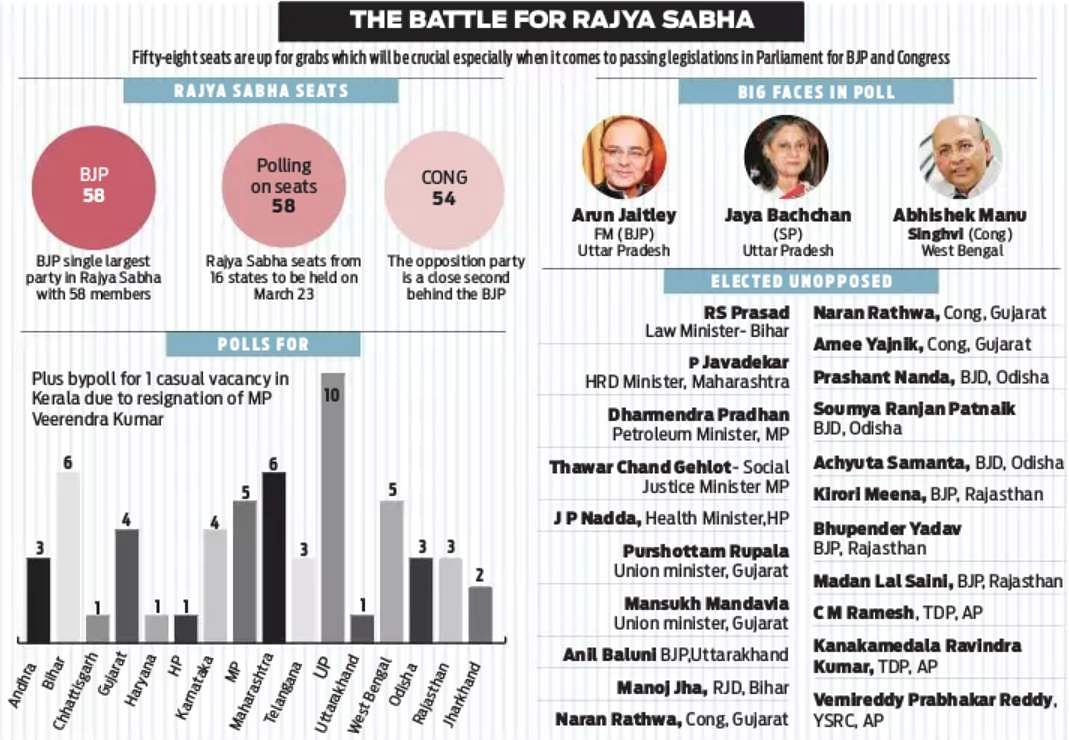 The BJP is expected to gain about a dozen seats in the Upper House and consolidate its position as the largest party. However, it is still far from a majority in the 245-member house.

The Rajya Sabha vacancies next month include 17 from the Bharatiya Janata Party (BJP) and 12 from the Congress Party.

Voting is held between 9 am and 4 pm. Counting of ballots will be taken up at 5 pm, an hour after the end of votes.

(With inputs from Express News Service and Agencies)

Stay up to date on all the latest Nation news with The New Indian Express App. Download now
(Get the news that matters from New Indian Express on WhatsApp. Click this link and hit 'Click to Subscribe'. Follow the instructions after that.)
TAGS
BJP Arun Jaitley Mamata Banerjee Rajya Sabha polls