His tweet came when Chief Election Commissioner O P Rawat was addressing a press conference to announce the schedule for Karnataka polls but had not announced the date.

NEW DELHI: BJP's IT cell chief Amit Malviya today tweeted the date of the Karnataka Assembly polls before the Election Commission announced it, prompting the panel to describe the leak as a "very serious issue" that merited a probe and "stringent action".

Malviya, however, tweeted that he had only quoted a news channel.

His tweet came when Chief Election Commissioner O P Rawat was addressing a press conference to announce the schedule for Karnataka polls but had not announced the date.

The BJP IT cell head said the election would be held on May 12 and counting would take place on May 18.

While he was correct on the polling day, the votes will be counted on May 15.

When Rawat's attention was drawn towards the tweet, he described it as a "very serious issue".

He said people can conjecture but noted that as information has been "leaked", the Election Commission will probe the matter and take "stringent action" both "legally and administratively".

The CEC later said the tweet was incorrect as the actual date of counting was May 15 and not May 18.

Reacting to the incident, senior Congress leader Mallikarjun Kharge said, "Amit Malviya tweeted Karnataka elections dates at 11 am. It means BJP is dictating polling dates to Election Commission. I expect EC to work according to the Constitution and law, and not let information leak. Such a thing has never happened before."

Malviya who actually got the dates wrong, deleted his tweet within minutes.

Congress' social media in charge Srivatsa had also tweeted before the official announcement.

Later, he tweeted that "For those asking me about my tweet on the poll dates, wasn't listening to the EC presser, saw local and national media flashing the dates and thought that it has been announced. Simple as that." 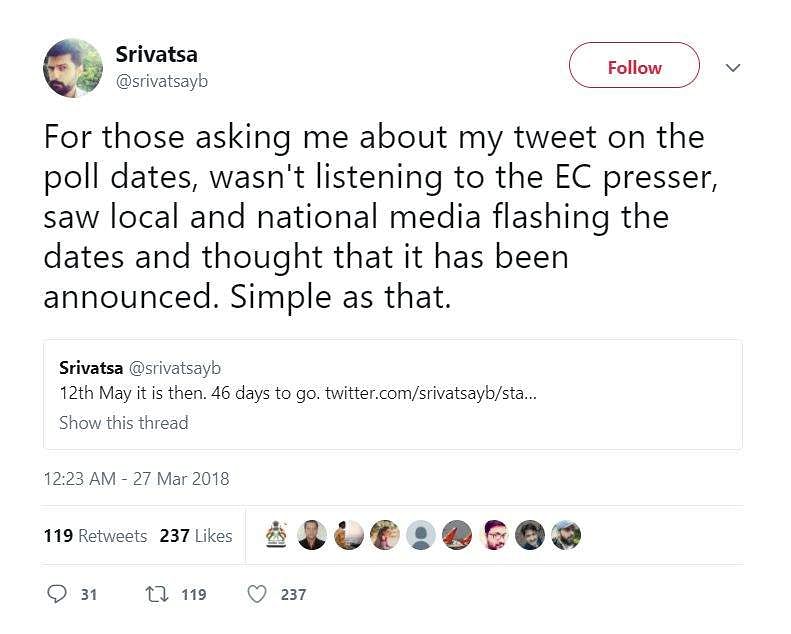 According to fact check website Altnews.com, national as well as, Kannada television channels had announced the poll and counting dates before Amit Malviya.

The Election Commission on Tuesday announced that voting to elect a new Karnataka Assembly will be held on May 12 and results will be declared on May 15, setting the ball rolling for one of the most prestigious battles between the Congress and the BJP.