Christopher Wylie, in a deposition before the House of Commons, said the company had worked extensively in India and believed it was employed by the Congress.

NEW DELHI: Christopher Wylie, a former Analytica employee turned whistleblower, in a deposition before the House of Commons Digital, Culture, Media and Sports Committee in London said the company had worked extensively in India and believed it was employed by the Congress.

"I believe their (Cambridge Analytica) client was Congress but I know that they have done all kinds of projects. I don't remember a national project but I know regionally. India's so big that one state can be as big as Britain," Wylie said as part of his deposition.

Wylie also told the lawmakers that Cambridge Analytica has offices in India and employed staff.

"I believe I have some documentation on India which I can also provide to the committee if that's something of interest.

The BJP cited the deposition and demanded an apology from its president Rahul Gandhi, saying he stood "exposed".

Union minister Ravi Shankar Prasad said, "the whistleblower has publicly confirmed that the Congress was indeed their client. Rahul Gandhi had been trying to divert attention. Today, he stands exposed. The Congress and Rahul Gandhi must apologise to the nation," told reporters tonight. This vindicates what the BJP had been saying from day one."

Prasad also dismissed the Congress' allegation that the BJP had used the firm's services, calling it a "pack of lies". 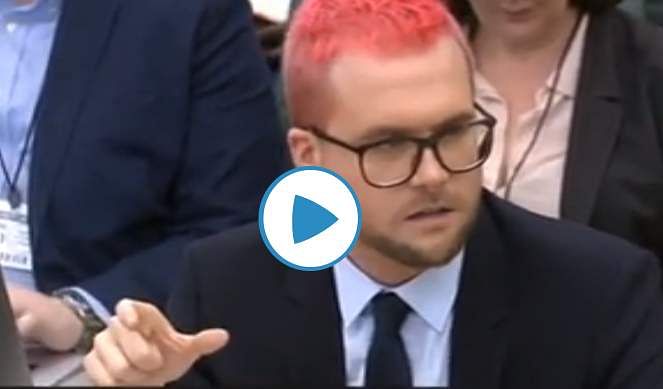 Congress spokesperson Randeep Surjewala replied by accusing the Union Law Minister of "lying" to divert the agenda after he cited a whistleblower's deposition to claim that the controversial data firm had worked for the opposition party.

Surjewala used the statement of an Indian citizen, who was a partner in OBI, the Indian arm of Cambridge Analytica, that the controversial firm was hired by an NRI using undisclosed funds to bring down the Congress government, and asked whether Prasad believed more in a foreign citizen than an Indian.

He also dared the Law Minister to answer questions posed at him and whether he would lodge a case against Facebook, OBI and Cambridge Analytica for the truth to come out.

"The Congress has had no truck with Cambridge Analytica ever or have we ever hired its services. But BJP needs to answer, who was this NRI business person who hired Cambridge Analytica in the run-up to 2014 polls to manufacture false surveys, to ask leading questions and to bring down the Congress Government?" Surjewala asked.

Surjewala said the Law Minister and the Modi Government refuse to answer these questions and "they only want to divert the agenda".

The Congress leader said they had challenged them to lodge an FIR against Facebook, Cambridge Analytica, their partner firm in India, but asked, "Why has the Law Minister not done so. Why is he perpetually lying."

"Lies, lies and lies is the only way forward for the Modi Government," he alleged, saying there is a 'No Confidence Motion' pending consideration, which the Modi government is desperately trying to avoid.

It is preposterous to even assume that a company that was being used by an NRI businessman from undisclosed funds to bring down and spread canards against the Congress UPA government in 2014, would be used by the Congress party, he said.

Surjewala said Prasad did not deny when a categorical question was asked whether or not he knows that an NRI business person was used to hatch a conspiracy against the Congress in 2014 elections and he did not deny.

He alleged that privacy is being infringed on a daily basis, yet the Law Minister "continues to lie".

"We want to show him the mirror of truth and ask him that the same whistleblower that he continues to quote, who does not know whether or not a political party used Cambridge Analytica," he said.

(With Inputs from ANI and IANS)

Stay up to date on all the latest Nation news with The New Indian Express App. Download now
(Get the news that matters from New Indian Express on WhatsApp. Click this link and hit 'Click to Subscribe'. Follow the instructions after that.)
TAGS
congress BJP Rahul Gandhi Cambridge Analytica row Christopher Wylie