Until last year, Board used to send question papers to examination centres on the morning of test to prevent leaks

NEW DELHI: Until last year, the CBSE used to send question papers to examination centres on the morning of the test but for some inexplicable reason, the CBSE this year sent the papers a day in advance, increasing the chances of leakage. This has prompted the Delhi Police to ask the CBSE to clarify on the changed process.

“We have come to know that earlier CBSE used to send the question papers in the morning to schools and a few hours before to the banks at least in Delhi till last year, but the format got changed. This time, banks received the question paper way in advance and probably schools too. We have asked the CBSE to clarify on that,” a senior Delhi Police official involved in the investigation said.

Experts also feel that without the connivance of some insiders, possibly CBSE officials, the leak would not have been possible. Speaking to The New Indian Express, former CBSE chairman Ashok Ganguly said, “The leakage could be handiwork of an insider, perhaps a prominent insider, present at any of the checkpoints.”

He said there are multiple stages, which includes assembling of paper by various experts who are not known to each other. The paper then moves to “moderators” and then to the “storage point” — a bank or some secure place. From the secured storage point it is sent for distribution to exam centres.In all these multiple stages, a lot of security measures are ensured. But as the CBSE has expanded so much and incorporated new examination centres, banks, where papers are stored, it is highly possibly that these new centres and storage points are behind the leaks.

According to sources, two Delhi schools are also under the scanner for their role in the leaks. “There are two schools which are under the scanner. Currently I can’t share names and other details with the media,” Special commissioner, Crime RP Upadhyay said.

Upadhaya confirmed that the leak happened ‘at least’ a day before the commencement of the examination of Mathematics and Economics. According to sources, the gang got sufficient time to copy the questions and send the drafted hard copy of leaked paper to CBSE chief.

Another fact which points to the role of insiders is that main suspect Vicky Wadhwa told police that he got the paper via WhatsApp, forwarded it and helped his students to solve the paper, which can’t happen within 1-2 hours or late at night.

“Initial investigation has confirmed that leaked question paper were accessed a day before. The main suspect who runs a coaching centre told the police that he receives the paper through WhatsApp like other people, he helped his students to solve the paper,” Upadhyay said. 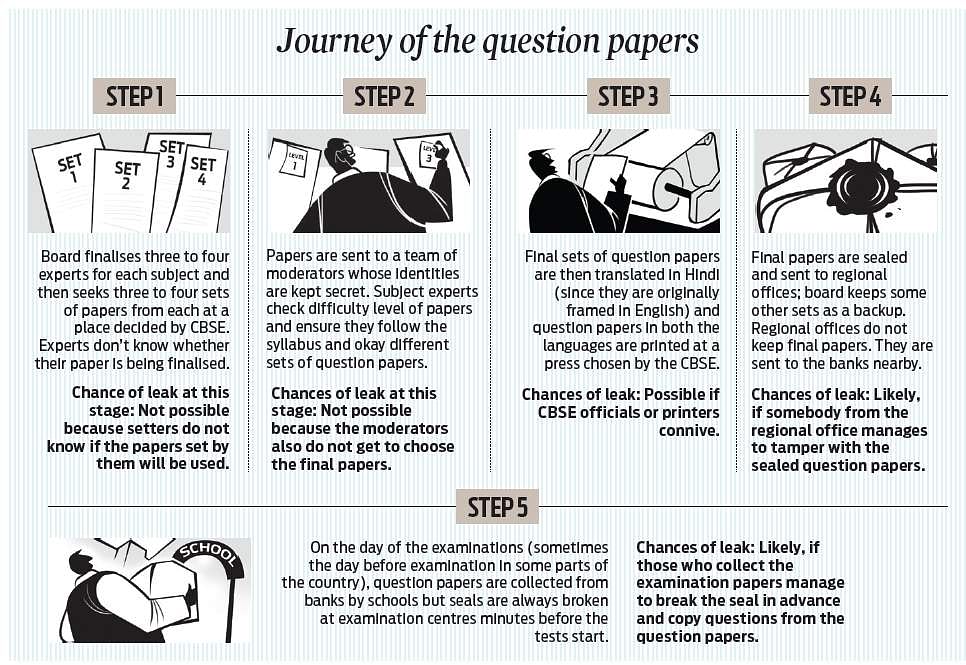 Stay up to date on all the latest Nation news with The New Indian Express App. Download now
(Get the news that matters from New Indian Express on WhatsApp. Click this link and hit 'Click to Subscribe'. Follow the instructions after that.)
TAGS
CBSE Delhi Police CBSE paper leak CBSE leakgate