Tyre killers have been installed at Amanora Park Town in Pune to stop wrong-way driving.

PUNE: Tyre killers have been installed at Amanora Park Town in Pune to stop wrong-way driving.

Tyre killers are essentially a metal strip that acts as a speed breaker for the person driving on the right side.

However, it has spikes on the opposite side, so if someone tries to drive or ride their vehicle from the wrong side, the spikes will puncture the tyre.

The concept was inspired by the techniques used in other countries to control traffic violations.

It was installed a month ago for about Rs 1.75 lakh and is effectively working to control the traffic violations, claimed Amanora Park security officials. 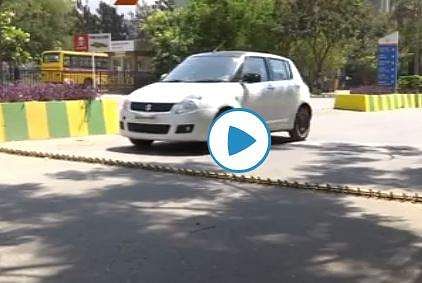 Stay up to date on all the latest Nation news with The New Indian Express App. Download now
(Get the news that matters from New Indian Express on WhatsApp. Click this link and hit 'Click to Subscribe'. Follow the instructions after that.)
TAGS
Tyre killers