She hopes to bring the situation back to normal in PDP’s south Kashmir fort, ahead of the 2019 Lok Sabha elections. 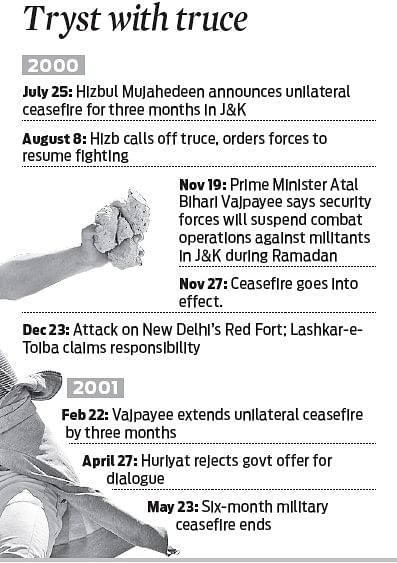 SRINAGAR: After the recently-held all-party meeting, J&K Chief Minister Mehbooba Mufti told reporters that participants unanimously urged the Centre to announce a unilateral ceasefire in the Valley during the holy month of Ramadan and Amarnath yatra. Although the BJP later disassociated itself from the “ceasefire call” and said only a handful of members raised this demand, Mehbooba’s PDP stuck with its plea.

Behind the scene, Mehbooba has been pressing central leaders to call for a unilateral ceasefire in the Valley to give people a breather from the Combing and Search Operations (CASO) and anti-militancy operations. PDP argues that the killings of militants and civilians set in process a cycle of killings, resulting in more youth taking up arms. South Kashmir is the PDP bastion and the problem for the party is that the region has become an epicentre of militancy.

The stopping of anti-militant operations and CASO might bring the situation back to normal in south Kashmir ahead of the 2019 parliamentary polls, hopes the PDP. The by-polls to Anantnag-Pulwama parliamentary seat, which was vacated by Mehbooba after taking over as CM on April 4, 2016, has not been held so far due to security concerns. According to a PDP leader, Mehbooba feels that the halt in the anti-militancy operations and civilian and militant killings would go a long way in normalising the situation in south Kashmir. And it would also create a conducive atmosphere for holding parliamentary polls in the Valley next year.

The truce is needed during the time or war and not during the peacetime, he said. The Valley has so far witnessed two ceasefires — one by the by Hizbul Mujahideen in July 2000 and reciprocated by the central government. Although other militant groups did not support the ceasefire, they didn’t attack. The first ceasefire lasted 18 days before the militant group set some conditions which were not accepted by the Centre and the unilateral ceasefire by the Central government lasted from November 2000-May 2001. The second ceasefire was not reciprocated by the militants and ultimately the then Atal Bihari Vajpayee government called it off on May 31, 2001.

If the third ceasefire, as proposed by Mehbooba comes into effect, it will benefit the common people, who have been witnessing death and destruction for the past three decades. “We want an end to killings, and a ceasefire is the need of the hour. Let both the government and militants agree to a ceasefire so that killings stop and an atmosphere of fear and pessimism gives way to hope and optimism,” Mohammad Yousuf, a retired government employee said. But, at this point of time, security officials are apprehensive about a ceasefire as they are having an upper hand against the militants and have killed almost all top militant commanders in Kashmir after launching ‘Operation All Out’ against militants following a surge in last year’s militant violence.

“If we stop anti-militancy operations this time, it will provide militants with an opportunity to regroup. It will ease pressure and give them a chance to plan future attacks on security forces and other major installations. This will undo all our gains,” a top security official said. He said all their operations against militants were “intelligence-based” and not random ones as was the case in the past. “It has taken a lot of efforts to strengthen our intelligence grid and we cannot lower our guard and allow militants a free run,” the security official said. However, he said if the government announces the ceasefire, they would abide by the decision.

Now we are on Telegram too. Follow us for updates
TAGS
Jammu and Kashmir Mehbooba Mufti Ceasefire violation PDP Ramadan Ramzan