Karnataka polls results 2018: The plot thickens after the mandate

Who won how many seats, the joy and sorrow of victory and defeat, all that was drowned in the speculation on who would form the next government. 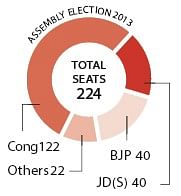 BENGALURU: Most poll forecasts had hinted at a hung assembly. Karnataka lived up to that promise by delivering a real long-drawn-out cliffhanger. The day stretched much beyond the counting, into the late hours of backroom play.

Who won how many seats, the joy and sorrow of victory and defeat, all that was drowned in the speculation on who would form the next government. Word on the street in Bengaluru was that a BJP government could come about in three ways — all three resting on reducing the assembly’s effective strength.

Here’s the gist: if the BJP gets invited, and a shot at a floor test, it will get a group of, say, 10 MLAs from the Congress and the JD(S) to abstain from voting. That will reduce the required half-way mark and enable the Modi-Shah duo’s nominee B S Yeddyurappa to sail through.

A harder choice: get a similar group of MLAs to resign, or even split a party. All eventualities will have the same result: the BJP’s present numbers, barely short of a majority now, will suffice.

Before that, the crucial question. By sundown, the ball had shifted from the people’s court to Governor Vajubhai Vala’s discretionary zone. Will he lean towards his fellow Gujarat politicians, and allow Yeddy to make a bid for government formation or let a wiser-after-the-polls Congress-JD(U) alliance get a shot at power? It’s a question fraught with constitutional nuances and the threat of legal challenge.

The doubt arises because the Modi magic, coming late into the play, could snatch the CM chair from Siddaramaiah but could not ensure a clear victory for the BJP. At 104, it was still eight seats away from the half-way mark.The rustic charm of Siddaramaiah and the spread of his welfare schemes could not entirely hold up against Modi’s onslaught and Amit Shah’s strategy, still, he had an ace up his sleeve.

In an apparent dig at the turmoil in Karnataka, Kerala Tourism tweeted a cheeky ad, “After the rough and tumble of the #KarnatakaVerdict, we invite all the MLAs to unwind at the safe and beautiful resorts of God’s Own Country”.  The tweet was later deleted.

Stay up to date on all the latest Nation news with The New Indian Express App. Download now
TAGS
Karnataka Elections Results KarnatakaAssemblyElections